Steady as she goes 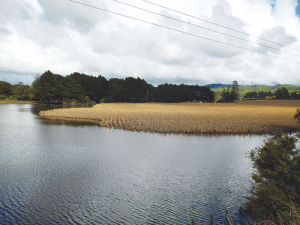 The recent floods in the North Island shortened the season for many farmers.

As now widely reported, dairy markets are in a somewhat balanced phase.

Product supply has retreated as farmers worldwide respond to low prices, and demand has recovered thanks to those same low prices and a general rundown of inventories in key markets, especially China.

Neither force has been enough to create a major price shock, so although some products (butter and skim milk powder) are trading at large premiums or discounts to average, the overall market is somewhere in the middle. Price shocks are, by their nature, difficult to predict. They’re usually brought on in turn by climatic, economic or political shocks, or by commodity bubbles.

But the everyday ebbs and flows of supply and demand can also add up to unbalance a market. Milk supply is often where this happens, given the lagged response to market signals (caused by the nature of farming as a biological system).

By the time the milk is produced and sold, the demand conditions that generated those prices have changed, and if everyone responded the same way at the same time, the overall response would effectively be an overreaction. The better the view of what’s happening in the market, the less chance there is of overreacting.

The European Union has for some time been the elephant in the room in regards to milk production. The removal of quotas, coinciding with the loss of its largest market (Russia) and a broader commodity price trough have seen much attention focused on Europe in recent years.

More recently, policy measures such as payments for farmers to reduce production, and the much-publicised Dutch dairy cow cull have led to suggestions that European milk production will fall sharply. Then there was the impending seasonal flood of milk through the northern hemisphere spring, that put downward pressure on commodity prices.

So far in 2017, the reality has fallen somewhere between the extremes. Milk production has been relatively steady – about 1% below 2016 levels in February, and commodity prices have steadied after early-year losses. The intervention program has reopened, and skim milk powder is once again entering government storage, but many reports thus far indicate that only some contracts are trading at the floor price level.

Nonetheless, eight rounds of tenders have failed to sell more than 40 tonnes of the 350,000 plus tonnes in storage, and the 109,000 tonne ceiling for this season is likely to be reached by the end of the spring. The European Commission expects that milk production in the 28 member states will grow by 0.3% in 2017, with per-cow production growth offsetting a likely fall in the herd size.

Due to domestic demand growth, the US hasn’t been too much of a concern for dairy exporters in recent years. But US milk supply continues to expand, and local analysts have reported milk being dumped in at least four states and regions, with manufacturing capacity insufficient to deal with growth in production. Not surprising when you consider that in the last five years, US milk production has only posted negative year-on-year growth for six individual months (out of 60). Only one of these months has been in the last three years.

Whilst herd expansion is only part of the story, the USDA is forecasting that there will be another 25,000 cows producing milk by the end of the year; farmers are in expansion mode and more milk is on the way. Most of this growth is concentrated in the southwestern states (Texas, Arizona, New Mexico).

The rule of thumb in the US is that when ‘revenue over feed costs’ is greater than US$7.50/cwt for six months or more, milk supply expands. March marks the ninth consecutive month this has happened, with recovering milk prices and a continuation of low feed costs driving profitability. For the full year, the USDA expects milk production to grow by 2.5%, versus 2016, implying a total of about 99 billion litres.

Closer to home, the oft-employed strategy of trying to pick market direction based on New Zealand’s milk production has proven a difficult one this season. The drop in production following a wet spring turned out to be somewhat smaller than originally forecast, with March production (up 10% compared to March 2016) appearing to herald a big finish to the season. As it happened, this was just in time for Cyclones Debbie and Cook to hit in April and shorten the season for a number of farms in various parts of the North Island – though at the industry level the damage is limited.

With milk prices looking reasonable for a second season in 2017-18, NZ’s farmers are finally putting two years of extreme cashflow pressure behind them, and local analysts suggest confidence is increasing.

That said, many farmers have much ground to make up in rebuilding their businesses, and combined with ever-tighter environmental regulations stifling new dairy developments, growth in milk production is unlikely to reach the double digit rates of years past.

The bottom line? Milk supply is not likely to contract this year, so in the absence of a big shock we won’t see any material supply-driven gains in commodity prices. It isn’t expanding much either, but farmers in most regions are ready to capitalise if given incentive to do so. As a result, the expectation is that we’ll see competitive pressure keep commodity prices about current levels for some time.

• John Droppert is an industry analyst at Dairy Australia.

The Australian dairy industry will need 800 extra workers on farms by 2023.