Spierings gets the tick from farmers 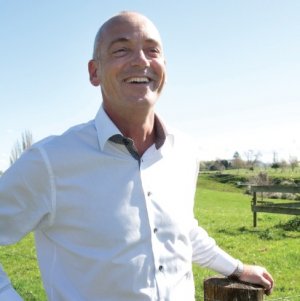 FONTERRA CHIEF executive Theo Spierings is expected to announce this week that the co-op’s annual revenues have for the first time exceeded $20 billion. The achievement caps Spierings first year at the helm of the co-op.

While some farmers believe the jury is still out on his performance, the Dutchman has received a tick from the Fonterra Shareholders Council and South Canterbury farmer, Eddie Glass, a fierce critic of TAF (trading among farmers).

Glass, who spearheaded a campaign to reject TAF, believes Spierings has performed “very well”. “He will go on to do big things for the co-op,” he told Dairy News.

Spierings took over as chief executive in the midst of divisive debate by shareholders of the proposed share trading scheme. In his first few months at the co-op Spierings expressed surprise at shareholders debating TAF in public rather than “keeping it within the family”.

Glass believes Spierings played a key role in the second TAF vote, where 34% of votes were cast again the scheme. “I believe his job had become untenable; he was spending so much time in the politics of TAF.” Glass says Spierings has won his support and he looks forward to “great things from him”.

Fonterra Shareholders Council chairman Ian Brown says while the council has not rated Spierings’ performance, he believes he is on the right track. Spierings earlier this year outlined his strategy refresh for the co-op, focussing on three Vs: volume, value and velocity.

Brown says the strategy refresh will take time but early indications are pointing to a positive outcome. “There is a real positive feeling in the air when you enter the Fonterra offices,” he says.

But not everyone is quick to give Spierings the tick.

Farmers probably haven’t seen enough of Spierings, or the results of his work, to make a call on his performance to date, says Feds Dairy chair Willy Leferink. “He’s been busy restructuring the business and as yet we don’t know if that’s for better or worse.”

However, there are high hopes it will deliver despite commodity market fluctuations, economic difficulties – notably in the US and Europe – and the high New Zealand dollar. “He’s trying to row a boat in a very difficult economic environment,” acknowledges Leferink.

The fact Fonterra will this week probably announce an annual turnover not less than $20 will be quite an achievement, but the big question will be what profit will drop out of that?

“I’ve no idea. Commodities are cheaper now which usually means profit increases and the half-year forecast looked good. I’ve not got super-big expectations but certainly some hope of a good result.”

Leferink says over the year he’s had two face-to-face meetings with the new chief executive, both of them about the Trading Among Farmers issue, which were “quite contentious”. Other than that he hasn’t had a great deal to do with him. Fonterra’s annual results will be announced on Wednesday.