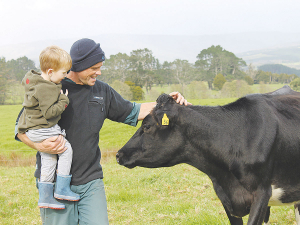 Jeremy Mounter and son Joe with one of their cows.

With no family connection to dairying and without any financial help, the couple own a herd of 330 Kiwi Cross cows – which they milk once-a-day year-round on Moss and Margaret Pepper’s farm in Matauri Bay.

Jeremy and a full-time staff look after the farming operations; Kate looks after their three young children and does the administration work. The couple are in their fifth year of sharemilking.

Kate told Dairy News that dairy farming really is an industry where one can progress quite quickly. However, she adds that it is important to align yourself with good farm owners and employers, and ensure you do due diligence on any prospective roles.

“It wasn’t till after a season or two contract milking that we realised sharemilking was actually going to be a possibility,” she says.

“Contract milking was a great stepping stone for us, as it introduced us to managing our own business. However, it is important to really negotiate and scrutinise your contract, as some contracts can leave you worse off than a managing role.”

She says they have built a resilient business that is low cost and profitable and can be tweaked according to the payout and seasonal conditions.

The couple moved into sharemilking four years ago and, last year, moved to the Pepper’s farm. The farm owners, in their 80s, still live on the property and are a great source of advice and inspiration for Kate and Jeremy.

“We also always seek advice from all avenues; farmers, contractors, feed and soil experts,” Jeremy says. “Then work out what suits our system and farm the best.”

He points out that modern cross breed cows are very efficient feed converters.

“We also analyse each herd test in depth. Low empty rates means we have much more scope to continually improve our herd.”

With a young family, OAD milking has been another key factor behind their success.

Kate says it is more sustainable – for the cows, the land, and the people.

“If we weren’t milking OAD, we would have left the industry years ago.

“You don’t have the afternoon milking constantly hanging over your head the whole time, and because we don’t have to be up milking before dawn, there is not as much burn out,” she explains.

“When we first decided to take the plunge from contract milking to share milking, we knew we wanted to start with top-quality OAD cows, rather than convert.

“We purchased our herd from a retiring owner-operator, who had been milking them OAD for over 16 years, so we knew what the cows were capable of,” Kate told Dairy News.

The farm has a tight calving schedule: 75-80% calved in the first three weeks and this means more days in milk.

“We average 3% empty, so plenty of scope for replacements, and fine tuning the herd,” says Kate.

Jeremy Mounter's first job on a dairy farm, after he left Lincoln University, was as an assistant on Rakaia Island.

After that, he moved to the Waikato where he progressed to a herd manager before becoming a farm manager.

After meeting Kate, who was working in the Bay of Islands on the ITM Fishing Show, he moved to Northland and the progression continued - from manager to contract milker for several years.

Jeremy says it was quite a shock for Kate coming into the dairy industry when they first met 15 years ago.

"The standard of housing, and roster expectations on staff was a bit of an eye opener. Thankfully, over the years the industry does seem to be improving in this regard," he told Dairy News.

"Living on farm, and having one of us working off farm, allowed us to save most of our combined salaries, which ensured we had enough for a deposit when we decided to go sharemilking.

"It has been a hard slog, and still is, but now that we own our own herd, and are instrumental in the farm process. It is very rewarding to see all our hard work paying off."

The Mounters were introduced to their current farm owners through a mutual contact.

They have owned the farm for 50 years and it’s been milked OAD for the first time.

Jeremy says they meet with the owners and keep them updated.

“We respect their experience and knowledge and feel very grateful to be working with such open and progressive farm owners,” he explains.

“Although technology and farming systems have changed a great deal since they actively farmed, they share our passion for sustainable grass-based farming. The incredible native planting they have been doing on this farm for many, many years, should really be applauded.”

Attracting and retaining staff isn’t a problem for the Mounters.

“Since we became contract and then share milkers, it has worked out that all the farms have been drive in/drive out roles – so our staff still get a good work/life balance,” says Jeremy.

“We are flexible. If a staff member has a child’s assembly etc that they wish to attend, we will work around that,” he adds.

“Because of the OAD system, our staff don’t tend to get as worn out. Since moving to this farm last June, we have installed automatic cup removers in half the shed.”

He says this means that the shed can be milked solo if necessary, and they encourage regular time off for everyone who works on the farm.