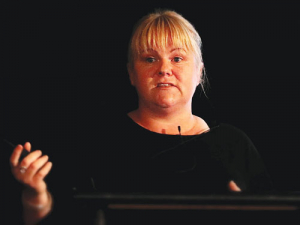 This disruption, which is changing what we eat, was the focus of the keynote speech at the recent Agmardt NZ Young Farmers Conference in Christchurch.

There’s a restaurant in Boston with a robotic kitchen,” Julia Jones, KPMG, said. Called Spyce, this world-first was created by four robotics engineers who wanted “healthy food at a reasonable price”.

Customers order using a touchscreen then robots do the rest. Ingredients are dropped into a row of rotating woks, which cook meals in three minutes or less.

“Disruption in the agri-food sector is coming from computer scientists,” said Jones.

It’s likely to be “another three to five years” before lab-grown meat is available in supermarkets in the US.

“The only thing they haven’t quite worked out is how to grow the fat and muscle that gives meat its taste,” she says.

World food production is a US$8 trillion industry. New Zealand earns $40 billion annually from the food it exports.

“We have a big advantage because we can produce artisan, niche products and demand a higher price,” said Jones.

The audience heard that deer milk produced by Pāmu Farms (formerly Landcorp) is being made into ice creams and other desserts by chefs in restaurants in Auckland and Wellington.

“I recently visited one of NZ King Salmon’s farms in the Marlborough Sounds. There were 33,000 fish in one pen — amazing,” she said.

NZYF members were encouraged to understand consumers and find out what they are willing to pay a premium for.

“If you travel overseas, go into an expensive-looking supermarket and see what sort of food is on the shelves,” said Jones.

“I went to a supermarket in California last year and they had a crazy big fridge with a sign on it that said ‘grass fed milk’.”

The world’s population is projected to reach about 10 billion people by 2050.

“That’s a huge jump in calories needed to feed all those people,” Sarah Hindle, from Tech Futures Lab, told the conference.

Devising ways to sustainably feed everyone poses a challenge for scientists and food producers, and it opens new career opportunities.

“We see growth in the rise of the agricultural technologist,” she said. “They’ll have ability to manage technological systems and have expertise in robotics, automation, drones and data electronics.”

Food and fibre is the most “activist disrupted” sector globally, second only to petroleum, says KPMG’s global head of agribusiness, Ian Proudfoot.

Trip of a lifetime beckons

Two students from Southland Girls’ High School have been selected for the trip of a lifetime to the US.