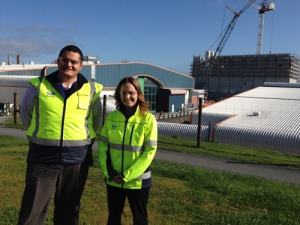 Major milestones are being knocked off as construction on one of the world's largest dryers races towards completion.

The result is over one million working hours on the new Fonterra Lichfield milk powder dryer.

For more than 3,000 people representing 300 companies, the finish is now clearly in sight as the September commissioning date for this world-class dryer nears.

South Waikato operations manager Sam Mikaere says it takes one look at the numbers behind the build to get an appreciation for its impressive scale.

"This is not just any dryer we're building. Along with our D2 dryer down at Fonterra Darfield, this will be the biggest milk powder dryer on the planet," he says.

"From the hours of collaboration and planning between so many teams, to the amount of technology and stainless steel, the numbers behind the build are mind-blowing."

• Construction began on October 7, 2014 and first milk will go through the plant just one month shy of two years later - a build spanning 692 days.

• More than 76,000 truckloads of Earth have been moved – over 530,000m3 of soil. This pile of soil could fill Eden Park three and a half times, all the way from the ground to the top of the stands.

• 119km of stainless steel pipe have been installed at the factory. Laid flat, it is enough pipe to stretch from Auckland to Hamilton.

• The new dryer will be able to deliver up to 720 metric tonnes of milk powder per day, the weight of two Boeing 747s full of passengers.

• The dryer chamber itself tips the scales at an impressive 200 metric tonnes, the equivalent of 35 African elephants.

• The expansion will allow the site to process up to 7.6 million litres of milk daily from more than 500 South Waikato farmers. The new dryer itself will account for 4.4 million of those litres – enough milk to fill two Olympic-sized swimming pools.

Mikaere says the expansion is a demonstration of strong partnerships between Fonterra and its suppliers, delivering strong returns back to our farmers.

"It's extremely impressive to see such a large and diverse group of people come together to deliver this project. Everyone has contributed something to the build which has allowed us to do things faster, smarter, and cost effectively," says Mikaere.

"With just a few short months left, the Lichfield team is excited at the prospect of turning the keys on for the first time so we can continue to make dairy nutrition available to the world."