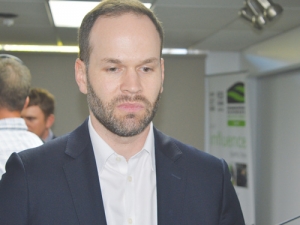 He says historically when NZ milk production dropped, prices shot up. But not this season: despite analysts forecasting a drop in milk production of up to 10%, prices continued to fall.

Bailey told the Federated Farmers Dairy council conference in Nelson last month that Rabobank was forecasting NZ milk production to be down at least 5%.

"But prices did not respond; they continued to drop... because they knew they could just go to Europe to get that milk now. NZ appears to have temporarily lost the advantage of influence on prices."

Bailey says NZ's inability to influence prices is one of five "tectonic shifts" happening in the dairy industry. Others are the growth in Europe's milk production, demand slowdown in China and Russia, low oil prices and growing appetite for value added dairy in the US.

The EU has pumped 9 billion litres of extra milk into the market over the past 24 months -- the equivalent of NZ growing 50%. This has caught everyone off guard.

"The market is completely oversupplied; that's why we are getting US$1800/t for milk powder."

On the demand side, China is importing less dairy products and Russia has banned imports from Europe and other western countries.

Added to this is the low oil prices affecting consumer demand for dairy in the oil-rich Middle East and North Africa.

According to Bailey, dairy and oil prices are "about 86% correlated". "There is a direct relation between oil and dairy when it comes to demand.

"The Middle East and North Africa, huge importers of dairy, and South America, the largest importer of NZ dairy products, are impacted.

"Oil income is down and economies are struggling with a price of US$38 /barrel; we see demand down in Algeria, Nigeria, Iran and Saudi Arabia."

Bailey says conflicts in the region are adding to dairy's price woes. But he expects dairy prices to bounce back before oil prices.