No nightmare over M. bovis – expert 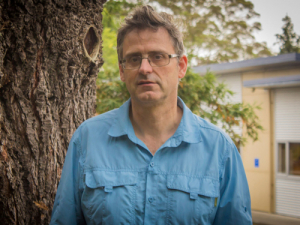 Richard Laven, an M.bovis expert based at Massey University.

Farmers should not be having nightmares about Mycoplasma bovis, says a technical expert.

Associate-professor Richard Laven, Massey University, is a veterinarian widely experienced in dealing with the disease in the UK, in particular Scotland where he headed a laboratory specialising in the surveillance of diseases in farm animals, including M. bovis.

He believes the Government has correctly decided to try to eradicate the disease and has a 90 - 95% probability of succeeding, notably because all the infections are the same strain of the bacteria and MPI appears to have identified a farm that is either the origin of the M. bovis outbreak or is close to it.

Laven says if there were many farms likely to have been where the disease first landed in New Zealand, the task of eradication would be made much harder. But to date this hasn’t been so; all the incidences of M. bovis appear to be traceable back to one source.

According to Laven, success in eradicating M. bovis will largely depend on farmers honestly coming forward and saying they may have the disease or have animals on their farm which trace back to the suspected, but as yet unproven, source -- the  Zeestraten farms in Southland.

“There is the possibility that people will be reluctant to come forward, so getting buy-in from Federated Farmers and other groups is vital,” says Laven.

“There are complaints that only one cow on a farm was infected with M. bovis, but that’s not true. The reality is if one cow was found to be infected there may be 70 or 80 others that weren’t found.

“You need farmer buy-in. Farmers have to say ‘I’m going to lose my cows for the benefit of NZ Inc; that’s the important farmer attitude. You need people who are willing to take one for the team.”

Laven says he fully appreciates that NAIT is a messy system that needs to be improved, but that a lot of time has been lost in detecting M. bovis because animals could not be easily tracked down. The sale of calves for cash, with no records kept, has been a problem.

In NZ’s favour is its being an island and having a largely outdoor farming system. Indoor housing systems such as in Europe where animals are kept close together allow disease to spread faster, Laven says.

For example, in NZ <1% of sick calves have pneumonia, whereas in Europe pneumonia accounts for 20-30% of disease in calves. The same could apply to M. bovis in NZ.

Laven says he suspects the use of ‘waste milk’ will prove to have been significant in the spread of M. bovis in NZ.

NZ is the first country to try to eradicate M. bovis. Australia, where only 4% of herds are infected, could attempt eradication but there is less pressure for that as the disease has been there at least 40 years.

Laven notes that Northern Ireland was also free of M. bovis until Britain joined the EU, but farmers fell to the temptation to buy cattle from Europe and with those cows came M. bovis. It spread to the Republic of Ireland.

Farmers need to change the way they farm

New Zealand farmers must change the way they farm to keep their farms free of M.bovi, says Richard Laven.

Many changes are quite simple, e.g. pasteurising colostrum and not using service bulls because farmers can’t be sure of the health status of such animals.

“Treating the farm as an island and having a very strict biosecurity process in place is essential. We are talking of a closed herd system which is really important. But do not get too paranoid about people coming onto your farm.

“Make sure that they are clean and have a foot bath so they can disinfect their clean boots. Don’t let people come on in dirty trucks but also don’t have nightmares about it,” he says.

Laven says if a farmer can’t operate a closed systems they should minimise their risk by being very careful when purchasing any stock. He says they should do their homework on the farms and people they are buying animals from to make sure they don’t get infected stock. He says farmers should also consider double fencing to keep stock from neighbouring farms at a safe distance.

Laven says there is reason for optimism about the decision to move to phased eradication of M bovis in NZ. He says that while a lot of cattle will likely have to be slaughtered, in the wider scheme of things, wiping out M. bovis will be in the long term interests of the dairy and beef industries and New Zealand as a whole.