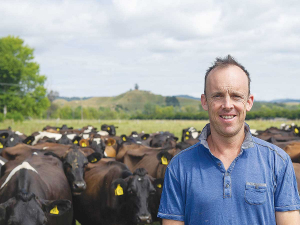 Fraser McGougan is the new chair of the DairyNZ Climate Change Ambassadors.

Climate Change Ambassadors are leaders for climate change action on dairy farms. They help communicate the challenges and opportunities dairy farmers face in playing their part to address climate change, alongside the rest of New Zealand.

“The ambassadors work to raise awareness and mobilise change for the benefit of the environment, farmers and New Zealand.”

McGougan (42) from Whakatane said he was looking forward to leading the ambassadors to engage with farmers, communities and decision-makers, and to provide a farmer voice at national level. He has been a Climate Change Ambassador since 2018.

“Farmers want to be part of the climate change solution,” said McGougan.

“Our role as Climate Change Ambassadors includes helping farmers understand the changes they can make on their farm to reduce emissions and improve water quality, while maintaining or even increasing profitability.

“There is no one-size-fits-all approach and small incremental changes on individual farms add up to big changes nationally.”

McGougan said now is a critical time in the national conversation about emissions reductions, with the Climate Change Commission announcing draft carbon budgets on how New Zealand can meet its climate change obligations.

Research by AgResearch has confirmed New Zealand dairy is already the world’s lowest emissions producer of milk. But there is more to be done to maintain our competitive advantage and do the right thing by the environment and New Zealanders, said McGougan.

New scientific developments will be important in supporting farmers to continue to address climate change, and investment in R&D and support from the government were crucial, he said.

McGougan is a fourth-generation farmer – Willowvale Farm has been in the McGougan family for 120 years. He and his wife Katherine have 430 cows on 143 hectares.

Among a number of awards, the couple won the Bay of Plenty Ballance Farm Environment Awards Supreme Award in 2019. They have three children, Emily, Isaac and Liam.

The McGougans have fenced all their waterways, matched their stocking rate to what the land can sustainably carry and decreased their imported feed.

The Climate Change Ambassadors group was created in 2018 under the Dairy Action for Climate Change. New members have been appointed this year to maintain the diversity of the group, with a mix of locations, farm systems and experience.

OPINION: The recent Climate Change Commission discussion document has made many farmers anxious.

Two dairy farmers from Canterbury and the Bay of Plenty will join DairyNZ’s board as new associate directors.

DairyNZ has launched a major public information programme to give farmers an accurate assessment of the Climate Change Commissions report and exactly what it will mean for them.

Something for NZ to celebrate

Growing a leafy vegetable for cows could reduce N leaching

Incorporating certain varieties of plantain into a cow’s diet has been shown to reduce the nitrogen concentration in their urine, which can leach through soil into groundwater.