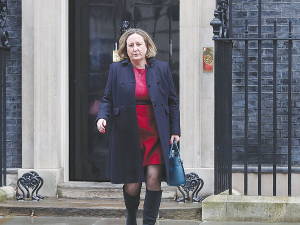 When Trade and Export Growth Minister Damien O'Connor arrives in the UK next month to try and finalise a free trade agreement (FTA) with Britain he'll be dealing with a politician that no one in this country seems to know, includign top government officials.

Anne-Marie Trevelyan was the other week promoted to the position of Secretary of State for International Trade - meaning the UK's top political trade negotiator who has replaced the better known Liz Truss whom Boris Johnson has promoted to Foreign Secretary.

The promotion of Trevelyan comes at a crucial time for New Zealand as there has been a political imperative on the part of both the UK and NZ to at least get an agreement in principle on an FTA. When O'Connor was last in the UK in July, he and Truss made something of a pledge that an agreement in principle would be agreed by the end of August. This deadline hascome and gone and little has been said as to what's happening, other than word from O'Connor that negotiations are still taking place.

Former NZ High Commissioner to London and politician Sir Lockwood Smith has expressed concern the delay could be due to NZ not being prepared to give the UK access to invest here and also what he describes as our highly protected legal services. Conversely the difficulties around access for our agricultural exports to the UK may be part of the stumbling block.

Smith says the good thing is that with Trevelyan at the helm of the UK's trade negotiations, the overall strategic direction of the talks is unlikely to change. This is because they have the complete support of Johnson who has stated that he wants to see a 'global Britain'.

"What's more, Liz Truss is still involved in the international arena as Foreign Secretary. I would be surprised if there was a change in approach," he says.

It is understood that Britain recently announced a significant funding package to support the international marketing of agrifoods product as part of their overall foreign policy strategy.

Given all these factors, it seems O'Connor's visit to the UK and later to the EU has been well timed. For Europe the summer holidays are over and politicians are returning from their favourite playgrounds in Crete, Spain and the south of France to Brussels and London. It will be the ideal time try and kick start the talks in Brussels and London.

Fifty-two-year-old Anne-Marie Trevelyan is the MP for the constituency of Berwick-upon-Tweed which is situated in the county of Northumberland. It is the northern most constituency in England and on the Scottish border. Trevelyan won the seat in 2015 from a Liberal Democratic candidate, but Labour has never ever held this seat.

An accountant by profession, Trevelyan is well known for her pro-Brexit stance and resigned from Theresa May's cabinet in 2018 over the latter's Brexit proposal. Prior to this latest promotion in the Johnson government, she was Secretary of State for Energy Clean Growth and Climate Change. In respect of this she has been criticised as being a climate change sceptic. Her response to this was, "This government is united in achieving our ambitious climate target goals. I am proud of what we have already done to tackle climate change and embrace a greener and cleaner future, including being the first major economy to legislate for a net zero target by 2050 and launching a bold plan for the UK's world-leading hydrogen economy."

Trevelyan's constituency is largely rural and sparsely populated, so she presumably she will have an understanding of agricultural issues. This may be good or bad for NZ; will she favour UK farmers or will she stick to Johnson dogma of free trade? A week or so ago she was reported as saying, "as international trade secretary, climate change and protecting the environment will remain a priority as I negotiate ambitious trade deals around the world."

As an aside, Trevelyan is also a singer and is a member of 'Singing for Syrains' - a charity which raises money for Syrian regugees. The hope is that while she and Damien O'Connor may never make the international stage together as a singing duo, they may at least sing the same song when it comes to free trade and elimination of tariffs and together concoct a quality UK/NZ FTA.