Monaghan stares down calls to go 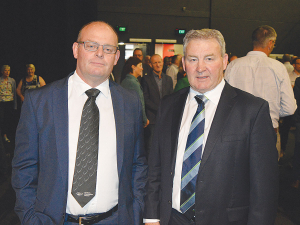 One shareholder Jan Marten Kingma told the meeting the directors are acting as if they weren’t involved in bad decisions.

“We are still living on the same planet: the same staff and board are still there.”

Kingma said shareholders are now watching the same board and staff implement the strategic change.

He called for accountability for the loss, incompetence and failure by Fonterra leadership.

“We want someone to take responsibility -- take ownership and simply apologise.”

He warned that Fonterra’s share of milk supply out of Southland is eroding thanks to its disastrous performance and lack of accountability.

He urged the directors to take his comments into account when appointing the chairman after the AGM.

Kingma, a former Fonterra board candidate, refused to comment saying he didn’t know media was present at the annual meeting.

Monaghan responded by saying that everyone must take responsibility for the co-op’s shortcomings in the past. So rather than cut and run he has decided to stay on to do something about them.

Monaghan says the board is now ‘totally rejuvenated’, assisted by a new chief executive and chief financial officer.

He later told Dairy News that he wasn’t surprised by Kingma’s call to resign.

Monaghan is due to retire as a director at the 2020 annual meeting. Fonterra said in September that it would decide next year on a succession plan for the co-op’s chairmanship.

“Having seen through the introduction of our new strategy and operating model, and with our divestment and debt reduction efforts well progressed, I will be working with the board in 2020 to facilitate chair succession,” Monaghan said in that statement.

“The timeline for that succession will be agreed by the board nearer to the time,” he said.

Monaghan took on the chairmanship after the sudden resignation of John Wilson last year.

Barron was appointed last week, replacing Duncan Coull who stepped down after four years in the role.

Speaking at Fonterra’s AGM last week, Barron said he is passionate about the co-op.

“I see this opportunity as the ultimate way I can contribute to our co-op’s success. I will work with Fonterra’s board constructively and will represent the view of our shareholders.”

Barron says priorities include the review of the council’s functions and discussions on Fonterra’s capital structure review.

Barron praised Coull for his contribution.