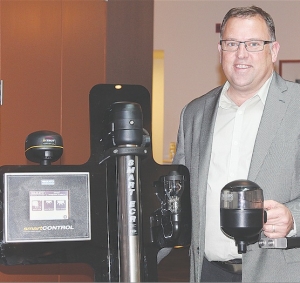 THE COMMERCIAL launch of Waikato Milking System’s electronic milk meter couldn’t have come at a better time according to chief executive Dean Bell.

After four years development the meter – designed by Waikato Milking Systems and manufactured by Millennium Plastics – was launched mid-2014. It won the Supreme Design Award at the Plastics Industry Biennial Design Awards in Auckland early October.

“We couldn’t have predicted this when we first began work on the meter,” Bell says “but the timing couldn’t have been better for farmers, because they now have access to probably the most accurate meter ever offered in New Zealand to measure per cow production on a daily basis.  This contrasts with traditional herd testing which captures production at points of time during the season.

“Farmers can look at rolling averages of milk profile details and see where individual cow production has dropped, giving them an ability to take remedial action. This type of insight pays dividends in times of reduced payout and when the environment’s working against you, like in a drought, because you can identify the cows which aren’t making money and put more emphasis on the ones which are.

“Farmers in the early years of their careers are looking for ways to save money without impacting operational performance. This contrasts with more established farmers who are able to weather the volatility of the market a little better, and are continuing to invest in automated milking technologies.

“As we’ve done in the past with our mechanical herd test milk meter and speed sampler, we worked with the International Committee for Animal Recording (ICAR) and used their performance criteria to ensure that whatever we launched to market would meet their formal approval standards.

“We looked at a lot of different meter designs… and initially we developed a few concepts which were similar. But in the end we developed something which is unique for its accuracy, simplicity and lower cost of ownership.”

“We could have launched the new meter a year ago, but held it back to design some of the complexity out of it.  The end design is simple and effective: servicing will be minimal and farmers will be able to do it themselves if they choose.”

“As an organisation we’re not spooked by it.  This business has a flat operational structure with all direct areas of the business reporting to me. I’m also active in the marketplace – at home and overseas.  We take pride in being close to farmers and farming so we can anticipate and respond to changes.  [We] work closely with farmers so we can understand and anticipate the challenges they’re facing onfarm.“

“We have made minor changes to the overall business strategy but these amount to trimming the sails, fundamentally not changing the course of the boat.”

Bell says the new ownership has not changed the essence of the business.  “There’s always been a strong sense of ownership amongst our staff, and the change simply meant some of those people could become owners in the real sense of the word.”

The designer of the electronic milk meter, Jim Pharoah, is a case in point.  “He’s been with the company 35 years and has remarkable attention to detail; you can see his touch in most of our products.  He’s part of an exceptional design team – people who can and do turn their hands to anything.

“We like to think people come to work at Waikato Milking Systems for something more than a pay packet;  there really is a shared commitment to being part of a truly iconic New Zealand business. Our iwi owners share this commitment.  They are multi-generational investors who want a tangible return now and into the future.

“This has always been an innovative company but in the last ten years we’ve matured somewhat to know where we win and where we have an edge. It’s not a matter of designing or producing the cheapest product; there’s no money or pride in that. Hand to heart we need to know that what we do is the best in the market, and will remain the best for the entire time farmers own it. It’s a standard the whole team buys into.

“When you get that type of commitment, it’s not hard to run a successful business.”