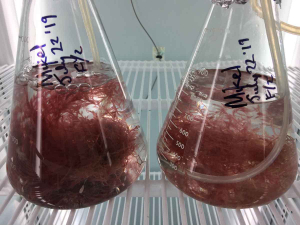 The Government is backing a project that could substantially reduce agricultural greenhouse gas emissions from cattle.

The Cawthron Institute will receive $100,000 from the Government’s Sustainable Food & Fibre Futures fund to turn a native red seaweed (Asparagopsis armata) in to a greenhouse gas-busting cattle feed supplement for domestic and global markets.

The announcement was made today as part of Prime Minister Jacinda Ardern’s and Agriculture Minister Damien O’Connor’s visit to Nelson’s Cawthron Aquaculture Park.

“If successful, this project could be a game-changer for farmers here and around the world,” O’Connor said.

In previous trials Asparagopsis has proven to reduce greenhouse gas emissions in livestock by up to 80%. Other products typically provide reductions of between 10 and 20%.

Australian research estimates that if just 10% of global ruminant producers adopted Asparagopsis as an additive to feed their livestock, it would have the same impact for our climate as removing 50 million cars from the world's roads, says O’Connor.

“Farmers know better than most about the effects of climate change and many are innovating so that they can drive down on-farm emissions. They need technology like this to help them get there though.

“Sustainable agribusiness and transitioning to a low emissions economy is a major focus for the Coalition Government. It’s why we established the $40 million a year SFFF fund last year – to invest in projects that deliver economic, environmental and social benefits for all Kiwis.

“Aquaculture is a growth industry for this country and has the potential to play a more significant role in our economy. It’s currently worth $600 million a year and employs over 3000 people.”

He says the Cawthron project could lay the foundations for a new high-value industry, along with the jobs that go with it.

“There is also export potential and on-farm economic benefits, including price premiums for milk and meat.

“We want to be the most productive, sustainable country in the world. Projects like this will contribute to New Zealand’s reputation in sustainable and innovative aquaculture and agriculture”, “Connor said.