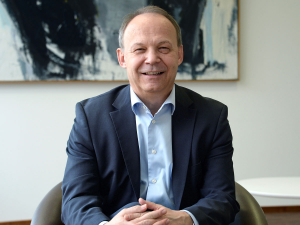 A global animal health company that has developed a novel methane inhibitor for cows’ rumens says it has hit a regulatory roadblock in New Zealand.

Dutch company DSM claims that trials have shown its 3-nitrooxypropanol (3-NOP) feed additive can reduce methane production in cows by 30%.

But the company has been unable to register the product in New Zealand because MPI’s register doesn’t have a category for such a product.

He told Rural News online that DSM has hit a roadblock on how to approve the product for use in NZ.

“The regulatory framework that NZ has doesn’t have a category for a product that’s main benefit is environmental performance.

“This is surprising given that the country is ready and very sensitive to climate change.”

DSM has already filed an application for approval of the feed additive in Europe. Registration of a product there takes on average 12-18 months.

Goppelsroeder says a green light from European regulators could even come before the end of next year.

“If they see this product as a special bullet, approval could come from Europe even faster.”

He says there’s “a big risk” that European farmers could leapfrog NZ farmers when it comes to mitigating methane emissions.

Goppelsroeder, who returns home today, is hopeful that MPI would create a new category and approve 3-NOP.

“We will be watching like hawk over the next few weeks."

Allan Kinsella, Director Assurance MPI is denying claims that there is no category in MPI’s regulatory framework for 3-NOP.

“3-NOP can currently be registered under the Agricultural Compounds and Veterinary Medicines (ACVM) Act as a ‘feed additive’, and this was communicated to DSM when MPI staff met with them this week,” Kinsella says.

“Consequently, there is no barrier to its marketing of 3-NOP as an environmental inhibitor in New Zealand in relation to MPI-administered legislation.  However, it may be subject to other legislation such as the Hazardous Substances and New Organisms Act administered by the Environmental Protection Authority.”

Trade name product registration under the ACVM Act can afford up to 10 years of data protection, however, as ‘environmental inhibitors’ are not currently within scope of the Act they are not eligible for data protection.

MPI is actively considering how to effectively and efficiently manage products like 3-NOP as ‘environmental inhibitors’.

A range of important factors need to be considered, such as their level of risk particularly in relation to trade and residues.

“In short, there is no ‘MPI roadblock’. It is DSM’s decision whether or not they enter the New Zealand market at this time.

“We will be engaging closely with industry and other key stakeholders in the near future as we continue our inhibitors work.”

Kinsella says MPI welcomes the effective development and use of emerging technologies to reduce agricultural emissions.

“We also recognise the need to ensure products, such as environmental inhibitors, can be used safely and effectively, supported by a robust regulatory process.”

* This story has been updated to include MPI comments.

The latest MPI report on the state of NZ agriculture points to another good year ahead.

Agriculture Minister, Damien O’Connor, says the Ministry for Primary Industries is continuing to stay connected to federal authorities in Australia as devastating fires affect the country.