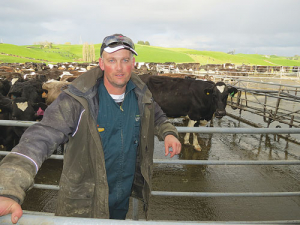 With the lowering of the farmgate milk price comes the squeezing of margins.

The average cost of production is in the $5/kgMS range; it has probably crept back up to the mid-fives, he told Dairy News.

“It does start to squeeze things again, and particularly if on the back of the good payouts you rushed out and bought a tractor and new silage wagon and all the rest of it – things will be a bit tighter.

“I think everyone will be watching closely and it will be back to a focus of double checking where farmers are spending their money.

“It is still a reasonable payout considering where we were three or four years ago. But the trend is not fantastic and hopefully we see that trend being arrested and things looking positive for the rest of the season.”

The latest GDT was the first one of the season in the right direction so it was expected with the downward pressure on the GDT that the forecast cut would happen.

The big unknown for him with where the season is going is how the northern hemisphere production will hold up during winter.

“We had that bad drought particularly in Europe during summer so they didn’t make as much supplement as they thought they would and fed out a lot of supplement during summer.

“Then they had a good autumn so they caught up to a degree.”

But he has heard they are behind where they would normally be. “So if they get a normal winter or tougher than normal winter you could see them needing to pull back on mouths to feed so their production could drop away which could create a bit of positivity in the market for the rest of us.

“To me that is the unknown: what is the weather going to do in the northern hemisphere and what is the amount of supplements they have on hand going into that winter?”

With the new team at Fonterra it is early days and the proof will be in the pudding, says Lewis.

“There is a lot of water to go under the bridge yet,” he says.

“As a farmer I would be keeping an eye on what the decisions are. It is too early to tell and it is hard to tell whether they are making the right calls on a lot of this stuff.

RaboResearch dairy analyst Emma Higgins says Fonterra’s decision to revise the milk payout was widely anticipated given the trajectory the commodity prices have taken since the beginning of the season.

It coincides with Rabobank’s latest forecast, revised last week prior to Fonterra reducing its forecast, at $6.25/kgMS.

“But ultimately we think demand is looking steady. We are still of the opinion that stocks are quite low in key markets, particularly China.

“We still see an upside to come in commodity prices. Particularly we anticipate that happening as we move through into 2019.”

She thinks the market has absorbed a lot of the extra production we have put out.

“That has been reflected in weaker prices but now we have moved past the peak I think we see firmer commodity prices particularly as we move into the first half, or quarter two, of 2019 as global milk supply starts to tighten.”

Production in Europe was slack for September and in feed supply there is a challenge to their quantity and quality of feed going into the European winter.

“We think that will play out as modest production growth and that will help to underpin stronger commodity prices.”