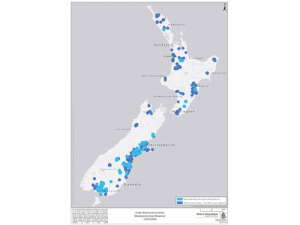 More beef farms than dairy farms are now infected with the cattle disease Mycoplasma bovis, according to MPI figures.

A recent update showed 40 properties were confirmed as infected -- 35 in the South Island and five in the north; 71 are under Restricted Place Notices.

Of the 40, 20 were beef farms and 17 dairy.  The remaining three were classed as ‘others’, which covers lifestyle blocks and calf rearers.

While the disease was originally detected in the dairy sector, affected beef farm numbers have been steadily creeping up as animal movements are traced.

The development comes as dairy farms prepare for a second round of national bulk milk testing.

And MPI says a screening test for beef animals is now in the works.

“Surveying dry stock animals is more challenging than surveying milking animals. However, it is necessary to conduct a beef survey and this is currently being designed.”

MPI said it is important to note that all farms affected by Mycoplasma bovis are subject to the same MPI rules and processes. This includes lifestyle properties.

“We encourage all farm owners, including lifestyle block owners, to make themselves aware of the risks and their responsibilities when it comes to Mycoplasma bovis.”

More information, including resources, is available on the MPI website.

The latest numbers show 28,279 animals have now been culled, from 30 infected farms. 142 properties that were under legal controls have since tested negative and have been released from controls.

MPI has now received 210 claims for compensation and has completely or partly paid 74.  The value of claims assessed stands at $17.4 million and claims paid at $13.1m. Two claims were listed as pending payment.

Meanwhile, the country’s dairy farmers should all have received an email by now outlining the second round of national milk screening tests for Mycoplasma bovis.

The testing round will take place in spring, after each region starts milking, when cows are most likely to be shedding the bacteria in response to the stress of calving and milking.

Unlike the first round of nationwide testing in February-March, when farmers themselves must take samples of their discard and mastitic milk; they are not required to take any action this time.

Tanker operators will take the samples at the time of collection as part of their routine process.

MPI says every dairy farm in the country will be tested.