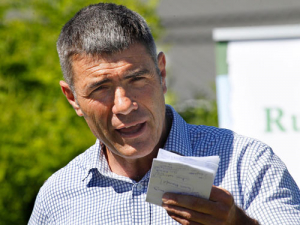 The invoices don’t have “any details about the price,” he says.

“There is something different about this invoice compared to an invoice a hard working farmer receives after buying feed, a new tractor or repairing his irrigation system.

“The farmers have received the bill but they don’t know how much it will cost them,” he told Dairy News.

Guy says the proposal to charge a royalty for irrigated water on farms is a ludicrous policy.

He is urging farming leaders to meet Labour’s new leader Jacinda Ardern over the next two weeks and seek more detail on the proposal.

“Labour must be upfront with the farming community rather than hiding until after the election.”

Dairy farmers have already planted 27,000km of fences along waterways, fencing off 97% of them.

Guy says pushing back riparian planting would result in loss of productive land and impose further costs like mechanical cleaning of waterways with diggers, which most farmers do once a year.

“Labour wants all the posts and wires ripped out and pushed back; is it one metre or four metres further out?”

He told Parliament that Labour’s proposed water policy sucks. “It is badly thought out, badly implemented and damages the most productive sector of our economy -- the primary industries.

“Labour has slammed the door shut on the primary sector. Damian O’Connor (Labour’s rural spokesman) got smashed to pieces… he got smashed by a caucus more excited by the urban vote than the rural vote.