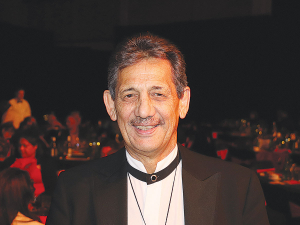 Kingi Smiler has been the chairman of the Ahuwhenua Trust Management committee since the awards were revived. He is also chairman of Miraka, the Māori-owned dairy company based in Taupo, and is chairman of Wairarapa Moana which owns several dairy farms in the Central North Island.

He is handing over the reins to Nukuhia Hadfield who along with Bart won the Ahuwhenua Trophy in 2015.

Smiler says it's time for him to retire and says he's enjoyed every moment in the job. He says every year is special because you see the pride and the passion of the whanau supporting the achievements of the finalists and winners. He says that provides the motivation and inspiration for the next generation to come.

"The competition has grown from strength to strength and it's moving in the right direction as it continues to grow. Māori have certainly built the skill and capability and the leadership has come to the fore. They are also connecting their farming enterprise with schools and the community," he says.

Smiler says it's been a privilege to support the legacy of Sir Apirana Ngata and Lord Bledisloe who inaugurated the competition 88 years ago.