Just keep stock out of waterways 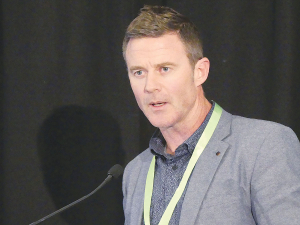 Speaking to the recent New Zealand Institute of Primary Industry Management (NZIPIM) conference in Christchurch, Wright-Stow said there is no doubt that land use affects water quality.

It is not uncommon or surprising to find waterways in a pastoral landscape with up to 15 times more E. coli and 10 times more nutrients than in a forestry landscape.

“The biggest single predictor of water quality outcomes in a particular catchment is the proportion of upstream land use.”

First, changing the farm system itself, such as through feed pads and reducing stock numbers and fertiliser application.

Second – the subject of his conference presentation – is what he calls edge-of-field mitigations designed to intercept contaminants before they enter waterways.

Farmers can take various practical steps, he said, but simply excluding stock from waterways is very cost effective. It can reduce phosphorus by 20-40%, sediment by 40-60% and E. coli by 50-60%.

Riparian buffers (setting a fence back with planting or simply grass buffers) would take stock exclusion to the next level.

There is “a good amount of science” suggesting that grass buffers on their own are hugely beneficial, he said.

Both international and NZ science suggests that 3-5 m wide rank grass buffers can reduce nitrogen, phosphorus and sediment by 50-70%. The wider the better, particularly for dissolved nutrients, but with diminishing returns beyond 5-10 m, he said.

DairyNZ is doing “a whole bunch of work” on optimising buffer design. A farmer could get 6-7 times better result for the same effort, fencing and planting by changing the buffer width to focus on the critical source areas.

“The easiest way to define where these are is to walk around the farm when it’s raining. You’ll see where they are, they provide a disproportionate amount of overland flows.”

Wright-Stow said a recent review by NIWA for DairyNZ said wetlands -- engineered or natural -- could reduce nitrate concentrations and load by 51-98%.

“And they’re very very simple to do.”

A farmer could get a strong return on investment just by fencing a natural wetland.

Another method is bunds (small dams). They work well in rolling and undulating land and lighter soils, although farmers could run into consenting issues if trying to raise too high a dam in steeper country.

During rain, the bund would capture and slow overland flow and allow contaminants to settle. The farmer would pull the plug after about three days to return it to pasture.

DairyNZ is also investigating two-stage channels – drainage streams with artificially created “flood plains” either side of the deeper main channel, so that when the water level rises in rain it spreads out over the sides, and slows and allows particulates to settle.