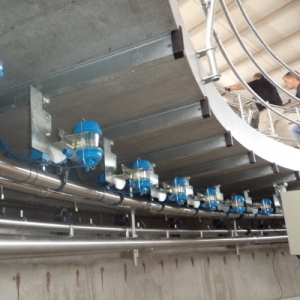 DAIRY TECHNOLOGY designer and manufacturer, Waikato Milking Systems, is looking forward to a productive 2014, with new trade opportunities opening up.

The company does business in more than 20 countries around the world, and is forging new relationships in international markets including China, Russia and Australia. Chief executive Dean Bell says the company is creating new trade deals with large-scale, high-volume, 24-7 milking operators.

Highlights of 2013 include supplying a rotary milking system to Voronezh in Russia, about 500km south of Moscow. Russia has an expanding dairy market and vast tracts of land available for dairying development. By 2015, Russia aims to be self sufficient in producing food and its dairy farmers are seeking technology that will help them milk efficiently and cost-effectively – a Waikato Milking Systems' strength.

Waikato Milking Systems has continued to supply large milking systems to two of China's biggest dairy co-operatives – Mengniu Dairy and Bright Dairy – in partnership with global herd management experts Afimilk. Two of the milking systems are counter-rotating 80 bail rotaries set up next to each other to milk 7500 cows three times a day. These rotaries were installed in Jiangsu Province, north of Shanghai, for Mengniu Dairy.

"These twin 80 bail rotaries are pretty rare worldwide but are a clear indication of the increasing scale of dairy farming in China," Bell says. "They are impressive to watch in action and their performance is exceeding customers' expectations."
Waikato Milking Systems has continued its track record of installing rotaries in the United Kingdom, South Africa, South America and Australia (including Tasmania).

The installations include a 50 bail rotary going into Uruguay at present and an 80 bail rotary being installed in Venezuela. A new 70 bail rotary and technology was provided for the largest dairy conversion in the United Kingdom, Sansaw Dairy. This trail-blazing property has about 700ha of prime dairy land, milking about 1100 cows, and has plans to expand. Sansaw Dairy was officially opened by a British Minister of the Crown, Owen Paterson MP, who described the dairy technology as "the future of the industry" and "world-class technology".

Waikato Milking Systems' design philosophy is to engineer complexity out of its dairy technology, keeping its high performance products very simple to operate. "The simplicity around a lot of our technology is very beneficial for dairy operators, particularly in the developing dairy markets. It's relatively new to them, so keeping the sophisticated technology simple yet reliable and easy to use has been very important. That's a key strength for Waikato Milking Systems," Bell says.