Help near at hand as pressure grows on farm 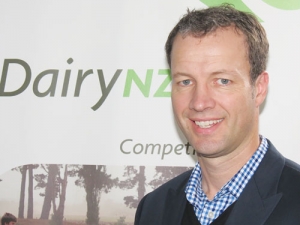 Onfarm cash income of farmers from all milk production this season will be under $4/kgMS, according to DairyNZ.

The comments come as Fonterra joined other dairy processors in slashing their forecast payout for the 2015-16 season, ending May 31.

DairyNZ chief executive Tim Mackle explains that some extra Fonterra payments for this season are shifting forward out of the 2015-16 season into 2016-17; very little was carried over from 2014-15.

"This will have ongoing effects on farmers' cashflows, their business equity and their ability to keep managing debt," says Mackle.

"The reduced milk price announcement today means our industry is facing a reduction in dairy revenues by around $800 million. That means $67,000 less in cash revenue for the average farm producing 150,000kgMS."

According to Mackle, hard calls will need to be made. However, dairy farmers are extremely resourceful and have been taking significant action to manage the last two seasons, he adds.

"Farmers' 'let's stick together and look out for each other' attitude will continue to come to the fore. And as always the industry will be doing its best to provide support, building on what has already been done.

"A positive note is that production and homegrown feed supply this summer is good. El Nino has not been as severe so far as some predicted. Some reasonable rain in December and January has bolstered pasture and crop growth," he says.

Milk production across the country to the end of December was down 2.6% on last season. Lower North Island (including Taranaki) and the Waikato had the largest declines this season so far, dropping 9% and 5% respectively.

"The issues creating the soft prices are supply related: Europe is well ahead on production in the last three months. It looks like we could start the 2016-17 season with less than break-even milk prices. On the bright side, a lower NZ dollar will provide some support to milk payments and should keep fuel prices and onfarm inflation in check. But the breakeven milk price for the average NZ farmer is still $5.40/kg/MS so they will be getting $1.50 less than that this season.

"Global conditions are challenging and continuing to impact prices for dairy. Those factors are completely outside the control of the individual farmer. That's the hard thing for them. Most will have done all they can to reduce their farm costs.

"This strengthens our resolve as an industry to help farmers through yet another difficult year. We'll be doing all we can to help them focus on tight and skilled pasture management.

"Pasture is still the cheapest feed to produce and our ability to grow pasture year-round is our competitive advantage as a country. We will be working with farmers to get the best out of their farming system and change it if they need to," says Mackle.

He says DairyNZ and its partners have the tools, resources and expertise to deliver that advice and support, some of which will be focussed on the wellbeing of our farmers.

"It's positive that dairy companies are signalling new forecasts now in January so farmers can make important decisions early like adjusting their stocking rates, drying off and preparing for the 2016-17 season.

"Farmers will be working extremely hard in their businesses and that can affect health and wellbeing. Many will have to pick up extra work on their farms. Some will be looking for off-farm income."

DairyNZ is working alongside industry partners to provide a variety of support, building on work carried out over the past two seasons:

Tools and resources - rolled out over the next few months these will be practical and targeted to help farmers make tough decisions.

Workshops for farmers - wellbeing workshops will start in mid-February held in partnership with the Ministry for Primary Industries. Rural Support Trusts have also been boosted, with training for regional leaders and extra responders now in place and more coming, thanks to extra funding from government and industry.

Farmer examples - top farmers will provide a half year reconciliation – what happened, how are they tracking, what changes did they make that they are going to continue with/why, how are they placing themselves for next season.

Trained professionals - about 400 rural professionals have been trained to recognise and help farmers under pressure. "We've seen a real pickup in their confidence to refer people on to support available because of that increased knowledge and understanding from the workshops," says Mackle.