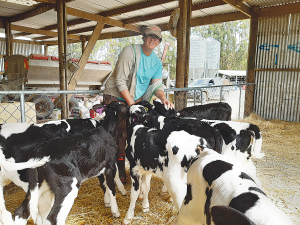 Ellen Sands can vividly recall the moment that ignited her passion for genetics and breeding Holstein Friesian dairy cattle.

She was 14 and helping family friends Vince and Sheridan Steiner with their show team at the 2014 NZ Dairy Event.

Ellen’s parents, Kevin and Lisa Sands, had asked her to have a look at a heifer being sold by Waipiri Holsteins at the event.

“We’d been buying pedigree bulls from Waipiri since 2009. They’d produced some amazing daughters, so we thought, why not buy a heifer,” said Ellen.

The yearling heifer the Sands’ had their eye on was Waipiri Destry Liza-ET VG88. Her dam (mother) was Waipiri Oman Liza-ET EX2.

“I remember feeling quite nervous during the auction, but we were the successful bidders. We paid $12,700,” said Ellen.

“We’d just felled and sold some pine trees, so Mum said it was okay.

“It was the first time we’d ever bought a pedigree Holstein Friesian heifer or cow. It was quite exciting.”

“Prior to that moment, I wasn’t interested in breeding or genetics, but everything changed with that purchase,” she said.

The Sands milk 500 cows on 220-hectares near Rotorua in the Bay of Plenty. Three quarters of the herd are Holstein Friesians, the remainder are Ayrshires.

In 2018-19, one of their cows Kapu HGD Abe Jenessa VG86, was the top fat producing registered two-year-old Holstein Friesian in the region.

“Jenessa was our top heifer for that season. She produced 595 kilograms of milksolids (kgMS),” she said.

“Jenisa holds our herd record for being the highest-producing two-year-old heifer. She did 615 kgMS in 305 days,” said Ellen.

The Sands’ milk year-round. The autumn herd starts calving in mid-March and the spring calves begin arriving in mid-July.

The milking platform is a mix of rolling to steep land. Running the large business is a true family affair.

Ellen’s dad Kevin handles milking and feeding, her mum Lisa does calf rearing and administration. Ellen takes charge of breeding decisions and helps with the calves.

Her brother Jack runs his own agricultural contracting business and oversees silage harvesting and cropping.

The farm has one full-time staff member Hayden Sturgess and two backpackers.

“I think what makes our farm a little different is we rear every calf that’s born. We haven’t produced any bobby calves for several years,” said Ellen.

Young stock are run on a lease block five minutes down the road.

“All our calves are reared until they’re 100kg, then we decide whether to sell or keep them,” she said.

“Our rising two-year-old heifers are all mated to low birthweight Angus bulls. In the autumn, our Friesian bulls are all sold on a contract at weaning.

“Angus and Holstein Friesian calves are worth significantly more than a crossbred bobby calf,” she said.

The Sands’ reared 157 replacement heifers in 2019-20. Twenty-four were sold for export in February. It is likely more will be sold prior to mating, or as in-calf heifers.

The herd is milked through a 48-aside herringbone shed.

“The herd’s diet consists of grass, palm kernel, and both grass and maize silage,” said Kevin.

About one tonne per cow of a palm kernel/molasses blend is fed in the milking shed.

The Sands’ bought the dairy farm in 2006 and started off with a herd based on LIC and CRV Ambreed genetics.

In 2010, they began using North American genetics over half the herd. The first calves hit the ground the following season.

They slowly transitioned to 100 per cent overseas genetics.

“I look for sires that produce daughters with excellent udders, and great capacity and production. Additional consideration is given to temperament, pin setting (we prefer level to sloped) and somatic cell count (SCC),” she said.

Ellen believes the herd has desirable type. Her focus now is on lifting production.

“Dad reckoned last year’s line of heifers was the best we have reared. They were stunning heifers,” she said.

“I’m now trying to increase the fat and protein percentages in our milk. If we can breed cows with higher components and lower volumes of milk they should live longer.”

Abe, who sired Kapu HGD Abe Jenessa VG86, is a bull the Sands bought from Doug and Lorraine Courtman at the national bull sale in 2015.

Beef + Lamb New Zealand (BLNZ) Genetics has launched a $5 million genetic evaluation system said to be a transformative step for the sheep industry.

About 1000 people will this month travel to New Zealand for three prestigious animal recording and genetics conferences.