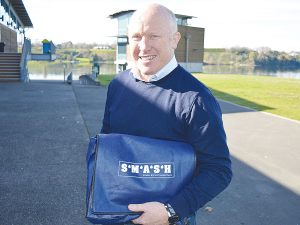 Sales of probiotics in China rose six-fold last year. Fonterra sends one third of its milk solids to China as ingredients, food service and consumer products.

Speaking at a recent Smaller Milk and Supply Herds (SMASH) conference in Cambridge, Fonterra chief operating officer Fraser Whineray said the Chinese economy had bounced back strongly, helped by the Government's ability "to lock things down pretty hard and open them up quickly".

"And the Chinese Government has really been pushing the benefits of dairy through Covid," Whineray says.

During the pandemic, people in certain Chinese demographics - children, pregnant women and the elderly - were urged to lift their daily dairy intake from 300 to 500 grams.

"Of course that's only 200 grams but there are just lots of people and when that happens, that can put quite a surge on," Whineray says.

"But largely it was leaning in to the notion of the nutrition that dairy is actually capable of doing."

Whineray says yoghurt was a key part of the growth, backed by cultures like probiotics that go into the product.

"We lifted our probiotics sales about six fold into China over the last year... This might only have been another 3.5 tonnes but when those things fetch for itself $3m/tonne, that actually does make a difference."

Fonterra probiotics in China are sold in pottles and made at its Palmerston North plant.

Whineray says there was a lot of positive referencing of the nutritional benefits of dairy during Covid.

"That's ultimately what we are here for - to deliver dairy's health benefits globally."

He noted that on average the global economy is strongly rebounding.

"There are some pockets that are well behind, some bits are very strong... the bits we are attached to tend to be doing very well economically.

"One economy going very well is China and it is about one-third of the milk solids.

"If you divide the world up and you look at the bits where we don't have massive trade barriers, and we can't get in easy behind the border, and the population of the remaining world that can actually afford NZ milk solids, then it's not out of proportion to have one third going to China," says Whineray.

Fonterra's chief operating officer Fraser Whineray has paid tribute to the co-operative's 6,500 overseas workers for their efforts during the Covid pandemic.

Despite some not having access to good health systems, having to pay for vaccinations and not living normal lives, they have kept "doing the mahi", says Whineray.

Fonterra's team in Saudi Arabia stayed in the factory for two weeks during the country's lockdown to ensure the plant kept running.

In Chile, Covid was so rife that every member of Fonterra's team would have known someone who either died or was seriously ill from the virus.

In Sri Lanka, staff set up distribution centres at their homes to ensure they could get Fonterra products to their communities and neighbourhoods since traditional distribution channels were jamming up.

Fonterra's US staff have been working from home for nearly a year, says Whineray.

"I mean, we've had our challenges here and still do getting labour in... they've had sme pretty interesting experiences."

While most Fonterra staff in New Zealand have had minimal disruption, Whineray, who joined the co-operative in March last year, hasn't met two members of the executive team in person.