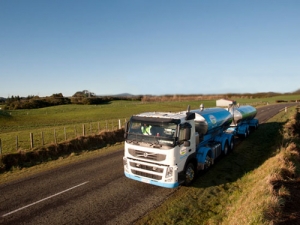 Chairman John Wilson says the stable forecast reflects the board's and management's view that international prices will continue to improve in the first half of next year.

Along with the November announced estimated earnings per share range of 45-55 cents, this amounts to a total available for payout of $5.05-$5.15/kgMS and would currently equate to a total forecast cash payout of $4.95-$5/kgMS.

Fonterra is required to consider its forecast farmgate milk price every quarter as a condition of the Dairy Industry Restructuring Act (DIRA).

Chairman John Wilson says the stable forecast reflects the board's and management's view that international prices will continue to improve in the first half of next year.

"We are looking out over the next nine months and basing our forecast on the view that current, unsustainably low prices will continue to impact production levels globally.

"We support the consensus view in the market that an improvement will take place, but the market remains volatile. While there are signs of a recovery, particularly in China, we still need the imbalance between supply and demand to correct."

Wilson says the imbalance is starting to reduce with year-to-date production in the United States up by only 1% and slowing, and New Zealand volumes expected to be down by at least 6% over the current season. "In the EU, however, farmers are continuing to push production, currently up 1%."

Fonterra's Board also reviewed the Fonterra Cooperative Support loan. The loan was made available on production from June 1 to December 31. The loan of 50c/kgMS is interest-free until May 31, 2017 with repayments triggered when the farmgate milk price exceeds $6/kgMS.

Wilson says the board's scheduled review weighed up the improved farmgate milk price and higher earnings per share forecast since the loan was launched, when the milk price was at $3.85, and the need for financial discipline from the co-op.

"We will provide some $390 million in support to around 75% of our farmers through the most productive half of the season, including the peak. Farms typically produce 60% of their milk in the first half, with production beginning to taper off from December, so we have provided support when it is needed the most."