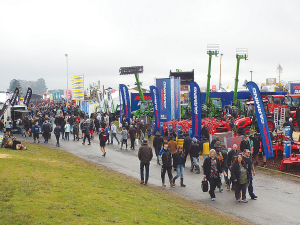 The National Fieldays will run towards the end of this year despite the Government easing Covid restrictions from this month.

Earlier in the March, Fieldays organisers announced the postponement of the normal June date and a move to late November/early December. The five-and-a-half month delay was chosen "to give all attendees, exhibitors and shareholders involved some breathing room and confidence during these uncertain times," said chief executive Peter Nation.

Much of the decision to shift to the end of the year was due to logistics, namely people and product, with the event needing around 13,000 contractors on site from mid-April to build the "small town" that becomes Fieldays.

The global supply chain was also cited as a major factor with Fieldays suggesting many manufacturers had greatly reduced stock levels, leading to issues fulfilling existing orders let alone finding goods to display or landing new innovations in time for the event.

The relaxation of restrictions from March 26 still leaves the event in a difficult position, just because of the significant numbers attending and the mix of outdoor and indoor sites.

"For us, the relaxaton of the traffic light settings has very little impact on our decision to push the event out to late November," said Nation.

"We understand the Government's cautious approach, but in our main building, exhibitor staff alone will exceed the 200-person limit. We were holding out for as long as we could for a changeto the orange traffic light level, but it doesn't look like that's happening any time soon."

Some exhibitors have shown a lack of enthusiasm for the new date because it clashes with the grass harvest and mating seasons, and it means only a six month gap between the 2022 and 2023 events. However, Nation says he isn't expecting this year's event to be any different to the last, saying "in fact it might be even bigger".

So, fingers crossed that the end of the year is the right move. Pack the sunblock, shorts and jandals and get in early to snap up those Christmas presents; the wife or partner will be thrilled when they open their presents on Christmas morning to find a new milking apron.