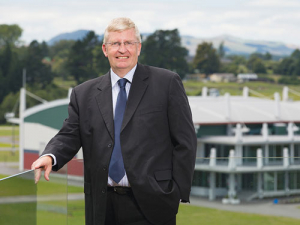 The New Zealand National Fieldays Society is going for gold in celebrating its 50th anniversary year and its journey since launching at the Te Rapa Racecourse in Hamilton in 1968.

The society earlier this year at the racecourse launch those celebrations and unveiled the commemorative artwork ‘Origin 68’. This intriguing creation is made from native timber and the very same roll of copper wire a band of farmers threw onto an ANZ bank manager’s desk as collateral for a $62,500 loan to launch the field days on a run-down farm at Mystery Creek.

It’s all very poignant, says Fieldays chief executive Peter Nation, because of “its inherent value, its signifying communication and its ability to transfer information -- all key facets of the current event”.

In another first, the society on March 13 hosted a function at the Great Hall at Parliament in Wellington for 90 guests including MPs and go-to people who gave support over the years in helping bridge the gap between town and country.

And a formal dinner to be held at Fieldays’ home, Mystery Creek, in April, will say ‘thanks’ to 80 exhibitors and individuals long associated with the event. Thirty of these have a 50-year connection, as do some brands and service providers, public relations companies and, of course, ANZ Bank. Cumulatively they have poured thousands of hours and millions of dollars into Fieldays.

The Number 8 Wired Award event will be launched in May, challenging artists to use the stuff that holds NZ farms together; their works will be showcased in May and June at Hamilton’s Arts Post building.

Also in May, the Mystery Creek Expo will open at Waikato Museum, presenting the Fieldays history, educational pieces for discussion, and again help create a bridge between urban and country, especially for children.

Later in 2018 a children’s book will break cover, portraying a brother and sister and their adventures at National Fieldays.

Then comes mid June and the 2018 Fieldays, themed ‘The Future of Farming’, with exhibits including Kiwi’s Best Kitchen looking at the imbalance of protein, the rural health and education hubs, and a re-vamped Rural Bachelor competition to be called ‘The Fieldays Rural Catch’, setting four boys against four girls, underscoring the key role of women in farming.

All exhibition space is sold, says Peter Nation, and there’s a waiting list for the 2018 and future events.

Reckoned the biggest such event in the southern hemisphere, National Fieldays attracts and hosts many overseas visitors, including this year from the Czech Republic and Korea.

In the run-up to Fieldays, the Association of Agricultural Field Days of Australasia will hold its annual meeting at Mystery Creek – 60 people from 40 field day events, who will also tour farms and businesses in the region. Michael Lambert, chief executive of the Royal Ag Society of the Commonwealth, will attend.