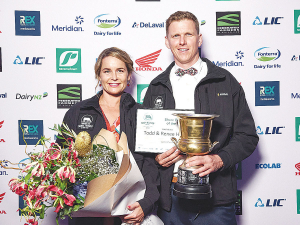 A former Auckland sales and marketing executive and a former adventure tourism guide and boutique lodge manager have won the 2022 Central Plateau Share Farmer of the Year title.

Todd and Renee Halliday were announced the winners at the annual regional awards dinner held at the Lake Taupō Yacht Club.

Todd was born and bred in Auckland city and had never set foot on a farm until he met Renee, who is a dairy farmer's daughter. The couple spent five years in the hospitality sector managing boutique lodges together before entering the dairy industry in 2009.

Todd initially spent two years as a farm assistant in Reporoa before progressing to a management role for a further two years. He and Renee then spent seven years in Mid Canterbury before returning to Reporoa where they now contract milk and are equity partners with Phil and Diane Herdman, on a 153ha Reporoa property, milking 520 cows. They won $17,060 in prizes and eight merit awards.

Todd (40) has entered the Dairy Trainee and Dairy Manager categories previously and believes the benefits of the programme include networking with other farmers and rural professionals and career progression.

Coming from a city background, farming wasn't a career Todd had considered, as it had never been suggested as a career option at school. Renee (39) hadn't planned to bring her family up on a farm.

"Ultimately, what drove our desire to get into farming was the lifestyle it could provide for our future family," says Renee. "We could see a clear progression path with achievable steps to work our way into farm ownership."

Todd holds a Bachelor Degree in Business and Diploma in Agribusiness Management and enjoys using his business background and skillset to run their business, as well as the day-to-day physical challenges of farming.

Their ultimate low-point in their career was losing their young stock to Mycoplasma Bovis early in the government's eradication programme, due to association with an infected herd.

"We experienced the sickening feeling of helplessness and felt it was such a waste of healthy and well-reared animals."

Todd and Renee became first-time jersey herd owners when they purchased their current farm's existing herd and consider their cows one of the strengths of their business.

"They're smart with good temperaments, easy calvers and efficient converters of feed that produce higher milk solids than other breeds," they say. "They are heat tolerant and because they're lighter they are less susceptible to lameness - it's fair to say we are now Jersey lovers! We can't praise the breed and their traits enough."

Othe strengths of their business include the cost structure, with farm working expenses under $4, giving the Hallidays the resilience to handle fluctuating pay-outs.

Nothing to lose, much to gain

Bay of Plenty Share Farmer of the Year winners Scott and Becks O’Brien say farmers have nothing to lose and everything to gain in Dairy Industry Awards.

Central Plateau Dairy Manager of the Year, Satveer Singh, comes from a farming background in India, where his father is an organic farmer with Sahiwal cows.