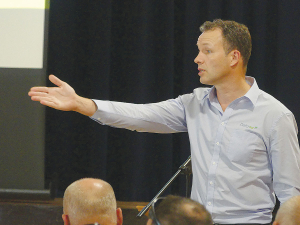 Dairy farmers could end up paying more for the Mycoplasma bovis eradication effort if they do not endorse the proposed Biosecurity levy.

The proposed levy would keep them ‘a seat at the table’ to have a say in managing the continuing response.

Those are the key messages dairy farmers are hearing at DairyNZ consultation meetings nationwide; they are asked to endorse a levy of up to 3.9c/kgMS under the Government Industry Agreement for Biosecurity Readiness and Response (GIA).

Otherwise, the Ministry for Primary Industries would implement a levy under the Biosecurity Act rather than the GIA and the amount and payback period would be at their discretion.

“That’s certainly what we’ve been advised by the Government,” DairyNZ chief executive Tim Mackle said after a meeting at Darfield last week.

“The general feeling of those who turn up... is that they now better understand the issue and what’s being asked. It’s not about whether or not you want to pay it, it’s how you want to go about paying it.”

The consultation period ends on February 28. Farmers are asked to vote either in writing or online, with the results to be collated on March 8. DairyNZ expects to confirm its approach with MPI on March 29 and the levy could take effect by June 1.

Asked if the farmers’ vote would be binding, Mackle said it would be “in the sense that if the minister is satisfied there’s enough support, then yes”.

“But we’re 100% owned by farmers so if farmers aren’t happy [to see this enacted] then we need to change it.”

Some farmers are unhappy with the 94% : 6% split decided between dairy and beef but Mackle said a review clause built into the operational agreement could see it change.

DairyNZ board member Colin Glass told the Darfield meeting that a biosecurity levy is already in place under the GIA, which DairyNZ signed up to last year.

It is now set at a maximum of 0.26c/kgMS -- appropriate for a “small scale foot and mouth incursion” -- but has not yet been incurred.

The GIA also gives a seat at the table with Government in managing response, said Glass.

“The key point is that without GIA the industry has no involvement and no governance role at all in handling biosecurity incursions and the Government can levy whatever it likes.”

Glass said the DairyNZ board isn’t happy with the dairy/beef split but it is justifiable because of the disease’s economic impact on the dairy sector. Eradication would not have been pursued had only beef been affected. Dairy was effectively asking beef farms to depopulate “for us,” said Glass.

Farmers attending the Darfield meeting said that if MPI had been doing its job in the first place the disease incursion would not have happened.

Glass said DairyNZ is “absolutely clear” there has to be a review into how it was handled.