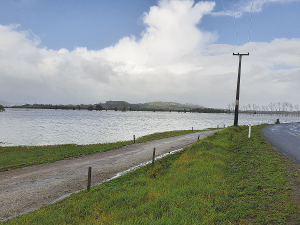 On some Northland farms the water drained away quickly, but on others it has lingered.

DairyNZ’s lead consulting officer in the region, Tareen Ellis, says many farmers had feed issues with the drought and this has been exacerbated by the floods.

She says following the drought, some farmers were starting to see the grass growing again, but they have suffered a major setback with pastures being flooded.

“On some farms the water drained away quickly, but on others it has lingered and these people now face the prospect of having to re-grass parts of their farms,” Ellis told Dairy News.

A regional advisory group (RAG) has been set up and feed coordinators appointed to ensure that farmers who need feed get it. The RAG group, which comes under the Northland Regional Council and also involves MPI, can provide grants to farmers to transport feed to their farms. This is similar to what has happened with the drought in Hawkes Bay.

Ellis says before farmers can apply to get a subsidy they need to have a feed budget and says her team is helping farmers prepare a feed budget if they don’t already have one.

She says the overall situation in Northland is very complex and that it is impossible to generalise on how the region is coping. She says it varies from district to district and in some cases from farm to farm within a district.

She says a farmer’s situation may also be determined by which farming system they are operating under.

“For example some farmers may have coped reasonably well with the drought, but the floods have affected them badly. Others have planned for the drought but the reality is that in some cases this hasn’t worked out.

“Some farmers have told me that the latest floods were not as bad as the ones in 2014. So the reality is that it is a very mixed bag,” she says.

Ellis says DairyNZ and other groups are taking a special interest in farmer welfare and says they are very conscious of the stress that people have been under.

“All told it’s been a long eighteen months up here for farmers,” she says.