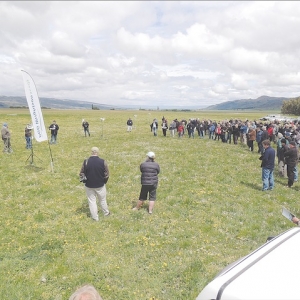 Delegates on a field trip.

DAIRY FARMS are few and far between in Central Otago but the New Zealand Grassland Association’s 76th annual conference in Alexandra last week still had plenty of papers relevant to the sector, and not just in the session designated dairy.

By modelling losses over 20 years, Vogeler and Agresearch colleagues Mark Shepherd and Gina Lucci conclude, “…risk of direct leaching from applied fertiliser was generally low, but at an annual rate of 220kgN/ha exceeded that from urine patches in one out of 10 years”, confirming the general wisdom that it’s when the nitrogen gets concentrated into urine patches that most losses occur in most years.

Among the usual solutions of avoiding fertiliser use during high leaching risk periods based on soil moisture and plant growth, they suggest using “duration controlled
grazing”, ie on-off systems, to prevent excreta deposition on pasture at critical times from an N loss perspective.

Their work used the Agricultural Production Systems Simulator which factors actual weather data rather than the long-term averages written into Overseer’s calculations.

On the fodder beet front, Gavin Milne of DLF Seeds presented results from trials in Mid Canterbury, North and South Otago, and Southland, showing that in 2012-13 there was nothing to choose between the top five of the seven cultivars tested across all four sites – Enermax, Magnum, Bangor, Troya and Kyros all coming in with 17.4-19.4tDM/ha yields, while Feldherr and Brigadier did 15.2 and 14tDM/ha respectively.

While they were grown only at three of the four sites, yields of Suga and Energaci were also up there with the top five, reflecting their high dry matter contents averaging 22.6% and 19% respectively. Both are listed as lifting, not grazing types in the paper, as are Enermax and Magnum. Bangor, Troya and Kyros get ticks in both boxes thanks to dry matter content of 17.5%. Feldherr and Brigadier’s dry matters were 15.4% and 13.6% respectively.

CENTRAL OTAGO is one of the least densely populated districts in New Zealand but last week’s Grassland Association conference still attracted about 360 delegates.

“Alexandra is completely full,” said mayor Tony Lepper opening the conference. “When you bring in 360 people like this it really stretches our town but we’re not complaining: it’s great to be full.”

Roughly a third of delegates were from research organisations, a third from commercial companies and a third farmers, said organisers.

“We have over 20 students registered this year which is fantastic for the future of NZGA,” said association president Warwick Lissaman.

More from the conference, including a powerful presidential address from Lissamann and evidence that many dairy farms miss grazing management targets, in 18 November Rural News.