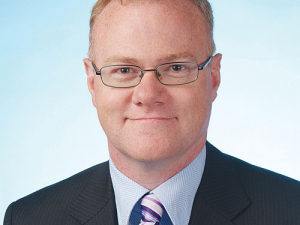 Would price declines at last week’s Global Dairy Trade auction have been bigger had there not been a downside risk to future NZ production from Mycoplasma bovis and the plan to eradicate it, wonders BNZ senior economist Doug Steel.

It is difficult to be sure, he says.  “But it’s interesting to see a price premium built into the forward curve of whole milk powder (WMP)  with near term pricing at US$3175/tonne while product into the heart of NZ’s season is priced as high as US$3275/t,” he told Dairy News.

The overall GDT Price Index fall of 1.3% was a marginally bigger fall than the indicators suggested, Steel says.

It was a “fraction disappointing” but still reasonable in the context of the usual seasonal softness in June (after the northern hemisphere milk peak),  a material pullback in oil prices over recent weeks and a strong finish to NZ’s milk season in autumn seeing Fonterra lift volumes at this event (including a 7.6% lift in wholemilk powder volumes).

“Buyers bought more product but weren’t prepared to pay more for it. WMP prices eased 1.1%, with an average price of US$3205/t.”

“Still a generally subdued level, but holding above US$2000/t as signals out of Europe become less downbeat including further reduction in the EU’s massive stockpile of SMP.”

The marginal decline in dairy product prices along with the NZD/USD lifting a cent or so since the previous auction puts a mild drag on milk price calculations.

“Dairy prices fell 3% when priced in NZD, partially unwinding the lift at the previous auction. So strictly there’s a hint of downside risk to Fonterra’s recently announced $7 milk price forecast for the 2018-19 season.

“But there is a long, long way to go, with the new season barely more than five days old. Our forecast for 2018-19 remains at $6.60 on the thinking that global dairy prices will drift lower in the year ahead.”

“Nationwide production for all processors came in 3.1% higher than in April 2017. That said, April production is modest compared to other months accounting for about 7% of annual production.”

“However we suspect the global butter shortage remains acute. The boost from April production is likely to be short-lived. Indeed, we still expect butter and/or anhydrous milk fat prices will set fresh record highs over the coming months.”

Rabobank dairy analyst Emma Higgins says while it was a soft reponse for the first GDT Event of the new 2018-19 production season, it is still 3% higher than the average index price (US$3395/t) last year.

SMP’s fractional lift of 0.3% to US$2051/t is a good result given Oceania SMP is the most expensive worldwide.

With WMP’s 1.1% softer result, more product was added for this event because of stronger milk production over the tail of the 2017-18 season.

“So this result is not a material loss.”