Dealing with the stress of farming 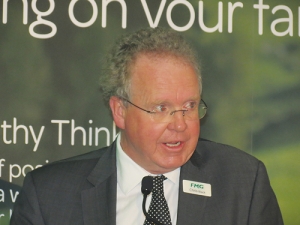 FMG insurance chief executive Chris Black says while farmers have plans and systems in place to manage their land, stock and machinery, they generally lack a plan for their own personal wellbeing.

He made his comments at the launch of Farmstrong, an initiative supported by FMG and the Mental Health Foundation aimed at improving the wellbeing of farmers and their families.

A new website – farmstrong.co.nz – offers help for farmers to deal with the stress of farming.

Notably, the website shows seminars by Dr Tom Mulholland, a rural GP, but better known for wellbeing programmes for employers such as Google and Microsoft. He will visit remote rural areas and offer health checks to farmers.

Farmstrong will also run a farmers’ cycle tour of the country next March.

Black says Farmstrong is intended to put the farmer front at the centre of his business plan, says Black.

“Its essence is if you are strong and resilient mentally, physically and emotionally it’s good for you, the farmer, because you are the most important asset on your farm. It’s also good for the business.”

In the process of putting Farmstrong together, 400 farmers were surveyed and dozens were interviewed face to face. A key finding was farmers’ desire for information and advice on how to get off the farm.

“It’s not about taking two-week holidays all the time, it’s just utilising little techniques, ideas, small steps that can make a difference. It’s about having different habits to deal with fatigue and manage nutrition and all those things that add up and make a difference.”

Black says the programme will be monitored over the next year, with a close watch on a key performance indicator – a positive difference to the wellbeing of 1000 farmers nationwide.  This will be achieved by measuring farmer participation in various events they will stage and by farmers’ use of the website.

The chief executive of the Mental Health Foundation, Judi Clements, says farmers can feel stressed because they feel isolated and struggle to achieve a balance in life because the farm dominates their lives. She says it’s also hard to get mental health support in some rural areas.

“We don’t want to diminish the focus on the farm but focus more attention on the farmer. We want to be working with them to look after their own wellbeing so they make better decisions, especially in such situations as adverse weather and the lower milk payout, [to give them] bounce-back capability and resilience.”

Clements says they also want men to feel that talking about problem issues is an ordinary thing to do.

Mulholland agrees farming can be a stressful occupation with many things farmers can’t control such as weather and prices for their products. School teaches how to read and write, but not how to manage our emotions, he points out.

“There’s quite a simple process… just explaining to people that thoughts are what create emotions, so while you can’t necessarily control your emotions you can control your thinking.

“Most of the thoughts that make us feel bad aren’t actually true and they don’t help us achieve our goals. [Farmstrong is to give] farmers practical tools to deal with these situations.”

Mulholland says he’s had a good response to the first workshop he is running for farmers, getting to people who want to be involved. As well as his workshops he plans a road trip in a mobile medical centre – a modified 1988 ambulance loaded with state-of-the-art equipment.

“Farmers have difficulty getting access to doctors and they say they don’t have time to do this. So we’re going to places where there aren’t any doctors, and we’ll set up up pop-up clinics. On the way to the National Fieldays we’ll stop outside the Whangamomona Hotel in Taranaki to do blood pressure, diabetes and cholesterol tests.”

Doug Avery, author of The Resilient Farmer, has launched a new workshop to help farmers improve their mental health and their businesses.

Coping better with ups and downs on farm

The importance of seeing regularly to your wellbeing will be the focus of Farmstrong’s site at Fieldays.

Dairy rubberware supplier Skellerup is giving its support to I Am Hope, a community group.