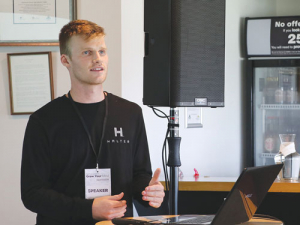 Chief executive and founder Craig Piggott this month told the Agmardt NZ Young Farmers Conference in Christchurch that the firm had just finished setting up its production line in China.

“We have received our first collars off the line, and we’re targeting April as our commercial launch. It’s all happening very quickly.”

Halter’s GPS-enabled collar enables cows to be guided around a farm by a smartphone app, Piggott said. It has had 18 months testing on a Waikato farm.

“The system uses audio and vibration to train a cow; the smartest cows only take two hours to train.”

“The collars can be programmed to bring the cows to the milking shed at certain times and identify cows on heat,” Piggott said.

“The collar has huge animal welfare benefits, especially on larger farms. If a cow stops eating because she’s sick or lame, she can be identified sooner.”

“We have built the system to work around existing permanent fences. In the long term, a farmer could pull out all fences and run a completely fenceless farm. There are big gains to be made with improved pasture utilisation.”

Farmers will pay nothing upfront to use the collars but will pay a monthly fee to use the software.

Halter’s team has doubled in the last six months and it now has a dozen jobs listed on its website.

No fences? No problem

While New Zealand is regarded to be the home of No. 8 wire and electric fencing, it looks like the future of fencing might be virtual.