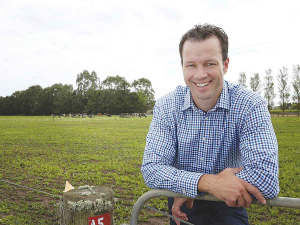 Dairy farmers are certainly not jumping over the hay bales with delight at the Government’s recently announced water reforms.

DairyNZ chief executive Tim Mackle notes that Environment Minister David Parker has taken some notice of the sector feedback, which has resulted in significant change, but there is still a sting in the tail.

He says it’s pleasing to see that some notice has been taken of DairyNZ’s call for an evidence-based and pragmatic approach to the regulations.

But concern still remains around what will be the eventual outcome of how the dissolved inorganic nitrogen (DIN) measure is dealt with and also the setting for nitrate toxicity.

Dairy News has been told that some people see the dairy industry as being picked on by government and that behind the reforms is an agenda to reduce cow numbers. While there appears to be little argument about the need for reforms, many feel the timing is poor given the drought and COVID-19.

However, Parker’s response to that is that delaying the reforms would be wrong. In terms of the drought, he says most of the reforms will take time to roll out and the drought will be well and truly over by then.

For the dairy sector the reforms include a requirement that by 2023, dairy cattle will have to be excluded from waterways over a metre wide and other cattle and deer by July 2025.

Dairy farmers will also have to apply for resource consent before converting more than 10 hectares of land to dairy farming.

In terms of fencing off streams the new rules require such fences must be three metres back from the stream, however, it’s been agreed that any present permanent fencing closer to the stream now will be deemed acceptable in the future.

On land with a slope of less than 10 degrees, all beef cattle and deer must also be excluded from waterways of more than a metre wide by 2025.

There will also be limits placed on the use of nitrogen – 190kg/ha/year – and dairy farmers will be required to report annually to regional councils on the quantity of nitrogen that they have applied per hectare.

Also there are special rules relating to the protection of wetlands.

Primary sector and other groups will be financially assisted with the implementation of the new clean water standards through a $700 million fund intended to create jobs in riparian and wetland planting, remove sediments and fund other initiatives to prevent farm runoff entering waterways.

Most of the reforms will be phased in over the next four years, but other are expected to take longer.

You've worked hard to get your cows in great condition for calving. Next, it’s time to make sure they stay on track for mating.