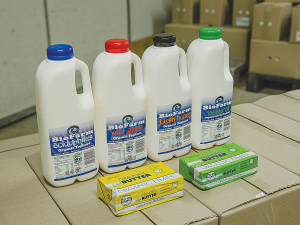 She says regulations around water quality and animal welfare will be increasingly dictating on-farm practices.

"Consumer demands will dictate which practices achieve the best economic outcomes for the farms; supply and demand will dictate the prices," she told Dairy News.

Cathy and her husband Jamie run BioFarm, one of New Zealand's oldest organic farms. BioFarm has been organic since 1979 and was certified organic in 1986.

Youghurt is BioFarm's main product, sold in stores throughout the country. Between 75 and 120 cows are milked on the farm, depending on grass growth and market demands. BioFarm also runs 200 polled Drysdale sheep and several hundred meat goats. All cattle are also polled.

Cathy says winning the top gong at the 2021 Organic NZ Awards this month was "somewhat bemusing".

"The traditional NZ pastoral farming that has been practiced on this farm for at least 80 years is now regarded as 'leading'. Some would describe our methods as backward."

BioFarm's decision to go organic 35 years ago was triggered by a persistent weed problem.

"We could see that biological control of the major weed problem, ragwort, was the only viable option," says Cathy.

Over the years the fertility of the farm has been built up with organic fertiliser from grazing animals and "the usual soil amendments". The farm doesn't use herbicides or nitrogen and no stock or feed are imported.

Cathy says going organic has given the farm a point of difference because most other farms moved some way from "the traditional self-contained family farm".

"Organic certification simply provided the quality assurance that consumers needed to be satisfied that the farming practices they favoured were being audited annually by a third party.

"That point of difference has made it possible to establish our own unique brands."

BioFarm yoghurt is processed in a purpose-built factory on the farm.

Cathy says the product is popular with consumers. "They say they like it because it's tasty, has few ingredients and is reasonably priced."

BioFarm has exported products in the past but in the current climate, they are focusing on the domestic market.

Cathy believes that organic farming is here to stay and in future all food producers will have the same sort of quality assurance and risk-management programmes that are used in organic certification.