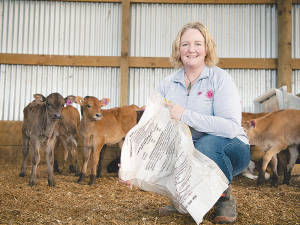 DWN president Trish Rankin says the past two years have been a stressful time for many women in the sector.

The new chair of Dairy Women’s Network (DWN) says connection is vital for the sector moving out of the Covid-19 pandemic.

Trish Rankin, a Taranaki dairy farmer and 2019 Fonterra Dairy Woman of the Year, took over as chair of DWN last month in a planned succession, replacing Karen Forlong.

Rankin says the past two years have been a stressful time for many women in the dairy sector.

Rankin, who also serves as a trustee associate trustee for AGMARDT, says one of the most important things will be working “shoulder to shoulder” with people.

“I’ve moved away from that face-to-face thing because that still feels like someone’s lecturing at you and we’re using the words ‘shoulder to shoulder’ because we haven’t done that… we’ve been on a screen, or we’ve been watching a webinar.”

She says that even prior to the pandemic the connection with event attendees could be difficult because of the setting, describing workshops where attendees were merely in the audience.

“Now, I want to stand next to somebody and have a cup of coffee and ask how they’re going.”

Rankin says people don’t want to just be told information, they want to interact with people.

She adds that the lack of connection is a by-product of the Cov-19 pandemic and the restrictions that came with it.

“We’ve been told to stay home, keep the country safe, watch webinars, reduce how many people go to events. We’ve been doing that for two and a half years and we’re in a habit now.”

She says that now is the time to encourage people to return to events.

“Let’s get people together,” she says.

Trish Rankin says one of DWN’s most important roles currently is that of providing information, particularly around compliance.

“We need the right information from a reputable source and that’s what Dairy Women’s Network prides itself on.”

She says that if there is an important discussion happening, for example the He Waka Eke Noa Climate Action Partnership, DWN aims to communicate the correct information from the correct source, “and we won’t be giving unreliable with that information”.

“Other people may have opinions on it but we will make sure that we are the trusted place for correct information.”

A series of calf rearing expos are being planned over the next months by Dairy Women's Network.

Dairy Women’s Network (DWN) has announced that 2019 Fonterra Dairy Woman of the Year Trish Rankin will take up the role of chair.

Dairy Women’s Network is hosting a series of webinars designed to help current and future farm owners to future-proof their businesses entitled How to Build a Bloody Good Business, funded by DairyNZ.