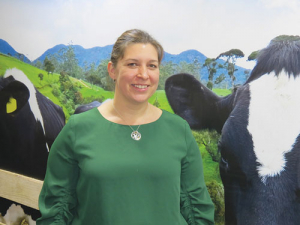 A proposed split to NZ dairy’s tariff rate quotas for Brexit is being viewed as unjustifiable and flawed.

That’s how the Dairy Companies Association of New Zealand (DCANZ) is describing the proposal by Britain and the European Union (EU) to arbitrarily split NZ dairy’s tariff rate quotas when Brexit occurs.

At present NZ can export 74,963 tonnes of butter, 7000 tonnes of cheddar cheese and 4000 tonnes for processing at reduced tariff rates to the EU, but when Brexit occurs this will change.

The executive director of DCANZ, Kimberly Crewther, who has previously worked in Europe on international trade issues, says the EU and the UK want to split the present quota to the two entities based on the port entry pattern in recent years. The proposed split for NZ butter quota volumes is 63:37%, repespectively. For some of the MFN (any country) quotas it is 100:0%.

Under the current arrangement which forms part of the EU and UK’ agreed World Trade Organisation (WTO) commitments there is flexibility to best meet the needs of producers and consumers in both the UK and EU. This could mean using the full volume in either the UK or the EU to respond to consumer demand.

She says under WTO rules, any changes made to agreements must not disadvantage any party, but she says if the splits proposal goes through, NZ will be disadvantaged in a number of ways.

“The loss of flexibility under their proposal means that we will not be able to meet market demands in either the UK or EU and that takes away existing trading opportunities for NZ producers. It’s important to remember that the trading relationship with the EU and UK markets are both important to NZ.”

Crewther says that even if the proposal to split quotas was justified, DCANZ would also be concerned about the proposed methodology and it has informed both parties of this and other concerns. She says what the UK and EU have done is split the quota on the basis of where NZ’s dairy exports are first landed in the EU.

“This assumes that the goods are consumed in the countries where the goods landed which is simply wrong. The port is more likely to be an indicator of shipping routes and supply chain logistics than of the point of consumption. Products could have landed in large ports such as Rotterdam in the first instance, but then been transhipped elsewhere in the EU or across to customers in the UK. There is really no way of tracing where that product goes within a geography where there is complete freedom of movement of goods.”

The other worry for NZ and other dairy producers is what would happen if there was a hard Brexit?

Crewther says in the case of the dairy industry there is a high degree of integration within the EU. A classic case is Ireland where milk harvested in Northern Ireland is processed in the south [the republic] and vice versa. She says the complexity of the situation is giving rise to uncertainty, i.e. that the current free trading of products between the UK and the EU may cease.

“The UK is a major dairy importer, with most of the product it imports coming from the EU. If there is a hard Brexit we could expect a level of ‘trade diversion’, meaning products that would otherwise have been traded between the EU and UK would instead face high tariffs and possibly instead be traded with other markets. If volumes were sizable this would have flow-on effects and be an added distortion in the global market.”

Crewther says such distortions typically have a negative influence on global markets.

DCANZ is working with the Ministry of Foreign Affairs and Trade to ensure that the concerns of the NZ dairy industry are voiced at the highest political level.

Crewther says the EU and the UK should honour their WTO commitments and ensure any changes to their own bilaterial relationship does not leave other countries worse off in terms of trade opportunity.