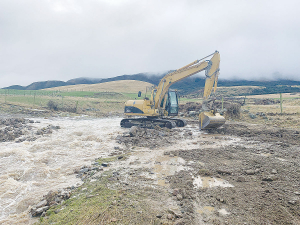 Mt Somers Station lost several kilometres of fencing where the river burst its banks but the property fared better than many others in the region. Photo: Mt Somers Station.

Mid-Canterbury farmers David and Kate Acland own Mt Somers Station, near the Ashburton River gorge and the epicentre of the heaviest falls.

They lost several kilometres of fencing where the river burst its banks but say others downstream were worse hit and faced months of clean-up and thousands of dollars in repairs.

He said they were lucky with where they were growing winter feed and positioned their silage pits.

"Stock-wise, we're back into our normal routine. We've got some sodden pastures where we're just having to re-jig our grazing rotation but other than that, we're pretty good.

"The water's starting to subside where it burst through the river and once that's gone down further, hopefully we'll be able to reform our floodbanks and then let that area dry out."

He already had the insurance process underway for fencing, stock water systems and other infrastructure.

The dairy shed needed some electronics repaired but he was already winding down milking and the herd was now dired off.

North Canterbury farmer Caroline Amyes said her district appeared to have dodged a bullet, compared with the worst-hit areas of Mid Canterbury.

"The indication so far is that it hasn't been a huge loss of stock. Everyone has been very proactive in managing their stock, ensuring that they're moving animals regularly and keeping on them to make sure that they're not inundated with floodwater."

"There's a huge amount of fencing and roading damage, lots of bridges washed out. It's key to get that infrastructure up and running as quickly as possible."

North Canterbury Feds dairy chair Karl Dean said most dairy farmers had tried to dry off their herds before the weather hit.

Trucking companies were also busy on Friday and Saturday, trying to get stock moved in advance of the traditional moving day of June 1.

"Obviously we all knew it wasn't going to be feasible to get trucks into paddocks and into wintering blocks," he said.

However, Dean said there hadn't been a "huge" movement of 50:50 share milkers and their herds. That was becoming less common year by year. Instead, it was the movement of people at management level, such as contract milkers.

He knew of some who'd been able to make the swap on the Friday before the rain hit.

"So hopefully there's been a bit of that leniency throughout the sector."

Dean farms near Lake Ellesmere at the bottom of the Selwyn catchment. Unlike the Ashburton catchment, the impact didn't appear too bad, he said.

"I believe it hasn't broken out anywhere it doesn't normally break out. A lot of people were at least perpared for this which is the main thing."

Drying out after a red alert flood

Canterbury is drying out after a rare red alert weather bomb dumped up to half a metre of rain across the province in only three days and caused "devastating" damage to swathes of farmland, especially in the dairying heartland of Ashburton.

Agriculture Minister Damien O’Connor has declared an adverse event for the Canterbury region, unlocking Government support for farmers and growers.