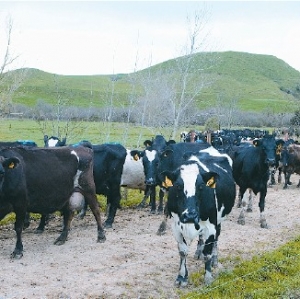 CHOOSING A WINNER in the 2014 New Zealand Sharemilker/Equity Farmer of the Year competition is a tough task for the judges, due to the varying backgrounds and positions of the finalists.

"It is a really interesting competition this year. A number of the finalists are relatively new to the dairy industry, having changed careers, and they also hold a variety of positions which highlights the many ways people can now progress in the industry," national convenor Chris Keeping says.

"The greatest factor they have in common – apart from being ambitious dairy farmers – is the majority of this year's finalists have Bachelor degrees. This demonstrates the industry is attracting talented people who are applying skills learned on the job or in other vocations to excel."

Keeping says the sharemilker/equity farmer winner will be announced at a black tie awards dinner attended by 650 people in Auckland on May 9, as part of the 2014 New Zealand Dairy Industry Awards programme. Winners will also be named in the New Zealand Farm Manager of the Year and New Zealand Dairy Trainee of the Year competitions and the winners will share more than $170,000 in prizes.

The 11 finalists in the sharemilker/equity farmer contest include a former professional rugby player (who obtained one All Black cap), two teachers, two veterinarians, a chef and a research technician.

One of the finalists, Canterbury/North Otago's Kevin and Sara O'Neill, are just finishing their second season in the dairy industry while Auckland/Hauraki finalists Bryce and Rosemarie Costar have more than 30 years' experience between them. Mr Costar (aged 49 years) is also the contest's oldest finalist, while the youngest three finalists are aged 27 years.

It is the first time three of the finalists have entered the dairy industry awards. Seven are second time entrants and it is the third time one finalist has entered the competition.

"When you add in the farm locations, with varying topography and climatic conditions to contend with, it does make it extremely interesting for the judges to determine who is doing the best with the resources available to them," Keeping says.

More information on the finalists can be found at www.dairyindustryawards.co.nz.

The 2020 Hawkes Bay/Wairarapa Dairy Industry Awards Share Farmer of the Year winners Nick and Rose Bertram are no strangers to success.

2019 Share Farmers of the Year Colin and Isabella Beazley, of Northland, say the benefits to their career and business from entering are worth the effort and time.

Hard work pays off for Share Farmers of the Year

Newly crowned 2019 Share Farmers of the Year Colin and Isabella Beazley plan to use their win to enhance their dairying careers.

Runners-up for the Canterbury/North Otago Sharemilker of the Year title are Shaun and Andrea Wise, who contract milk 590 cows for Dairy Holdings on a 134ha Rangitata Island property.