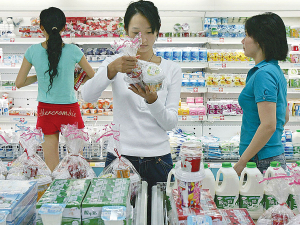 Chinese consumers are buying more dairy products despite an economic slowdown in the country.

Westpac dairy analyst Anne Boniface says the strength of Chinese demand for dairy in recent months is notable. This will be good news for New Zealand exporters relying heavily on Chinese consumers.

However, Boniface notes in her Dairy Diary report that supply concerns aren’t the only factor supporting the lift in dairy prices in recent months.

“The strength of Chinese demand has also been notable,” she says. “Chinese dairy imports were up 14% over January and February combined.”

In last week’s auction, buyers from the north Asian region (dominated by China) snapped up over 50% of product on offer, a touch ahead of the same time a year ago.

“This demand for dairy stands in stark contrast to concerns about the downside risk to growth in China,” notes Boniface.

“Our own view is that while GDP growth in China is set to slow noticeably this year, this slowdown won’t be centred in the household sector. This should be a silver lining for NZ agricultural exporters who are heavily reliant on Chinese consumers.”

Boniface says the market had been wary of at least some retracement in WMP prices as local weather normalised and concerns about the negative impact of recent dry weather on milk production eased.

“With DCANZ data showing NZ milk production in February was broadly flat on a year earlier (much weaker growth than we saw through the first half of the season, but perhaps not as low as some were anticipating) and decent rainfall in parts of the North Island in recent weeks, those supply concerns may have ameliorated somewhat.

“While milk collections for the remainder of the season are likely to be well down on the same time last year, we still expect nationwide milk production to end up about 2% higher. That’s stronger growth than the 0.3% lift Fonterra is currently forecasting for its own collections.”

Boniface says while last week’s pullback in WMP prices was broadly in line with our expectations, the higher fat prices of late mean the bank sees upside risks to its $6.40/kgMS milk price this season.

The milk production outlook for the rest of the globe is mixed, says Westpac dairy analyst Anne Boniface.

Australian milk production was down 11% in January 2019 compared to a year earlier, with national production 5.8% lower for the season to date.

Boniface notes that Australian farmers have struggled with a combination of high costs, shrinking herds and reduced supplementary feeding.

“While production this season will clearly be well down, looking ahead to the 2019-20 season, improving prices and weather mean Australian milk production is unlikely to continue to contract at the same pace as this year.”

In the US, exports have also held up better than milk production, at least until recently. US milk production was up an estimated 0.6% in February on a year earlier.

European milk collections were down 1.5% in January.