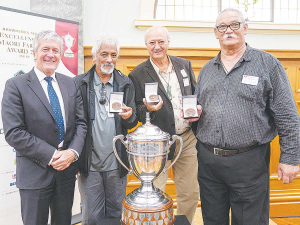 A Hauraki Plains dairy farm and two in the eastern Bay of Plenty are the finalists in this year’s Ahuwhenua Trophy for the top Maori Dairy farm of the year.

The three finalists were announced, last week, at Parliament by the Minister of Agriculture Damien O’Connor.

About 100 people, including the Minister for Maori Development, Willie Jackson, other politicians, Maori dignitaries, agribusiness leaders, government officials – as well as whanau of the three finalists – attended the function held in Parliament’s Grand Hall.

Representatives of the finalists were flown down to Wellington especially for the occasion and had the opportunity to meet the with other finalists and to be briefed on the various activities which will take place in the coming months.

Pouarua Farms - located near the township of Ngatea, on the Hauraki Plains, close to Thames. The 2,200ha platform comprises 10 farms – nine dairy units and one drystock farm and is the largest single dairy platform in the Hauraki region. A total of 4,600 cows are milked across 1,775ha, which produce approximately 1.65 million kgMS.

Tataiwhetu Trust - this property is located in the Ruatoki Valley, south of Whakatane. It runs 432 Kiwi Cross cows and carries 188 replacement stock on two support blocks. Tataiwhetu is an organic dairy farm milking once-a-day and the herd produces 129,000kgMS.

Tunapahore B2A Incorporation - consists of 376ha located at Hawai and Torere on the famous State Highway 35, on the East Coast of the North Island. The nearest main town is Opotiki. The milking platform is 132ha, with 385 cows producing 126,000kgMS.

Chairman of the Ahuwhenua Trophy Management Committee, Kingi Smiler says, once again, there are three outstanding finalists in this year’s competition. He says this is despite the fact that the country and the world is living in challenging and uncertain times.

Smiler says farmers, and Maori in particular, have come through adversity in the past and will do so again.

“I am full of praise and proud of our Maori farmers for entering the competition this year and showing the determination to showcase their very successful enterprises,” he says. “This is in the true spirit and legacy of Sir Apirana Ngata and Lord Bledisloe.”

Smiler says the good news is that, despite the pandemic, farm gate returns for dairy farmers remain solid and consumers world-wide are looking for the high quality, sustainably products that NZ farmers and processing companies produce.

At the end of March, into early April, field days – which are open to the public – will be held at the farms of all the finalists. The first one will on Thursday March 25 at Pouarua Farms, then at Tataiwhetu Trust Thursday on April 1 and finally at Tunapahore B2A Incorporation on Thursday April 8.

The winner will be announced at a gala dinner in New Plymouth on Friday 14 May.

Agriculture Minister Damien O’Connor presented representatives of each of the finalists with medals, which recognised their achievement in reaching the finals of the competition.

He says all the finalists farms are shining examples of the long-standing commitment of Māori farmers to sustainably developing their whenua and te taiao – the land and the environment – for future generations.

“They are at the top of their game, providing the inspiration to others to get out and do even better to grow the country.”

O’Connor says with more land being used in more innovative ways, Māori agribusiness is booming. He noted that profits for Māori agribusinesses hit $97 million in 2018, almost double from the year before, according to the latest Statistics NZ figures.

Meanwhile, Māori Development Minister Willie Jackson says the rise of Māori agribusiness is impressive, especially given its unstinting commitment to all aspects of sustainability.  “We are seeing great developments in all productive sectors and a trend of Māori playing an increasingly significant role in producing higher value food and fibre products,” he says.

It is now 88 years since the Ahuwhenua Trophy was inaugurated by visionary Maori leader Sir Apirana Ngata and the Governor General at the time, Lord Bledisloe.

The competition remains as relevant and as prestigious now as it was almost a century ago.

The Ahuwhenua Trophy competition was established to encourage skill and proficiency in Maori farming.

Sir Apirana Ngata realised the importance of retaining and improving what remained of Maori land was critical. He led the renaissance of Maori land development, which had been decimated during the colonisation of New Zealand by forced sales and lack of opportunity and access to development capital.

While the values and vision of Sir Apirana and Lord Bledisloe have remained unchanged, but the way the competition is run has moved with the times – especially since its re-launch in 2003.

The inaugural 1933 competition was open to individual dairy farmers in the Waiariki Land district and was won by William Swinton from Raukokore, Bay of Plenty.

As the autumn sun rose in the east, the first of more than 100 people from around the district started arriving for the field day.

Pouarua Farms is the largest, single dairy platform in the Hauraki region and it can also lay claim to be one of the best Maori dairy farms in the country.