A passion to farm and continuing the family legacy 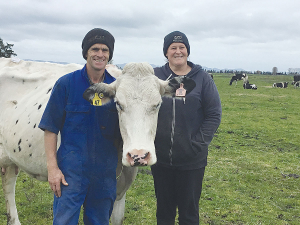 Gordonton dairy farmers Annabelle and Stephen Scherer are enjoying the pursuit of their passion for Holstein Friesians while building a business that continues a family legacy.

The couple have been sharemilking for the last 18 years. It was only around five years ago that the couple, who sharemilk 190 Holstein Friesian cows on 75ha, resumed their interest in registering, showing and classifying their cattle.

Annabelle is also the newest member of the Holstein Friesian NZ Board, elected at the organisation's annual meeting earlier this year.

"The Holstein Friesian breed has been a passion of mine since I was young," she says. "As a young girl I helped my parents show Charbelle animals, attended many Holstein Friesian youth camps and had the privilege of being awarded the Arapeta Trophy in 1993.

"I studied, had a family, sharemilked, and now that the kids are a little older, I have a little more time to pursue the things I am passionate about."

The Scherer's farm is owned by Annabelle's parents Dyanne and Wayne Osborne, who founded the Charbelle Holsteins stud 35 years ago.

Annabelle and Stephen have been sharemilking on the all-peat farm for six years, and also own a second herd, run by a manager on a nearby lease farm.

The farm system is pasture-based but the herd also receives silage from the 7.5ha of maize grown on farm annually, as well as an in-shed feed blend. The production target is 450 kg/MS cow.

The Scherer's split-calve their herd: 80 cows in autumn, and 110 in spring. They rear 25-30 replacements and sell the surplus. Mating is undertaken in a six to seven week window of AB, with a slightly shorter window in autumn.

"Our breeding policy is to be strict on stature to produce a moderate stature," Stephen says.

"We also play with some high type genetics on a small percentage of animals in order to produce some animals for showing."

Good udders, feet and legs are also important when it comes to breeding decisions, with improved fertility a key focus.

"We have used the World Wide Sires mating programme for many years now,” Annabelle says.

“It helps with deciding which sires go to which dams, much like TOP cows are assessed for traits and mated to suitable bulls accordingly. We are also moving toward using more sexed semen and beef genetics.”

“Prancer was the cow that got us back into showing,” Annabelle says. “We attended NZDE for the first time with three calves, one of which was Prancer, and it escalated from there.”

Giving Something Back to the Breed

“There are a great bunch of people on the board and I’ve really enjoyed my time so far,” she says.

“I also want to give something back to the breed that from a young age I have experienced many benefits and much enjoyment from.”

The family strives to achieve a good work-life balance. The kids play winter sports and Annabelle and Stephen enjoy social volleyball, in addition to the treasured time they spend showing cattle.

“Stephen and I enjoy attending the three major shows each year,” Annabelle says.

“It’s like a little holiday for us. The two older kids enjoy coming along with us, and we are hoping the two younger kids will enjoy it in the coming years, too.”

Annabelle and Stephen are working toward buying into Charbelle.