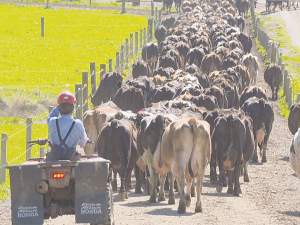 The border processes the Government used this year were hugely frustrating for farmers.

At the same time, it is also asking the Government to allow overseas workers to quarantine in separate housing on farm.

Dairy sector partners - DairyNZ, Federated Farmers and Dairy Women's Network - are asking for changes to be made to class exceptions by Agriculture Minister Damien O'Connor.

Obtaining MIQ spaces for overseas workers has hindered the arrival of workers urgently needed to milk cows and manage animals.

"This presents some risks to animal welfare and limits dairy's future productivity at a time when our contribution to New Zealand is critical for our wider economy," says Mackle.

In a recent joint DairyNZ and Federated Farmers survey half of dairy farmers reported they were short-staffed.

The request comes as New Zealand unemployment rates fell to 3.4% to equal the lowest level seen since 2007, shortly before the worst effects of the Global Financial Crisis hit the economy.

"We know from our recent farmer survey that 87% of farmers made changes to appeal to local employees, with farmers reporting improved rosters, reduced hours, flexible milking schedules and increased salaries.

"However, we still have a significant workforce shortage and that's why we need to reintroduce international staff to help fill some of the gap."

"The border processes Government used this year were hugely frustrating for farmers. If our borders do remain closed, we need processes streamlined to provide farmers with confidence they can recruit staff and get them into New Zealand much faster," says Lewis. "The Government needs to commit to acting now so we can access the people we need for next season."

"Farming families need assurance they will be able to fill vacant roles.

"Levels of physical and mental fatigue are not sustainable and as a sector we are hugely concerned about the wellbeing of our people.

The organisations are seeking a meeting with O'Connor.

Farmers are hopeful of getting overseas workers in before the calving season starts in July.

Nominations are now open for the Dairy Women’s Network (DWN) Regional Leader of the Year award.