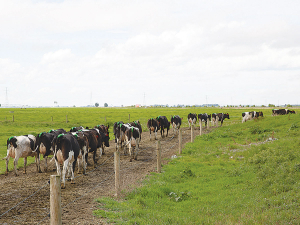 The size difference between the US and NZ data on elite cows is not surprising, according to Craig Robertson, sales and marketing manager for World Wide Sires (WWS).

At more than 6 million samples, the US genomic platform - owned and operated by the independent Council of Cattle Breeders (CDCB) - is said to be the most extensive in the world.

The size difference between the US and NZ is not surprising, according to Craig Robertson, sales and marketing manager for World Wide Sires (WWS), whose team of bulls is selected based from the CDCB database.

He says 70 countries feed genomic data into the US database, whereas the databases being compiled in New Zealand use genomic data from animals tested here.

"The number of countries feeding genomic data into the US database is the reason it has now reached a record 6 million samples."

Robertson claims the size of the data pool relates directly to farmer confidence.

"Farmers select the sires of their future herds based on the reliability of indexes which assess the traits most desirable for commercial dairy cows.

"In respect to genomics, the larger the reference population the more accurate the predictions become. With increased accuracy there is an increase in benefit to the end user, whether it be in making selection decisions on-farm or selecting the best sire possible for the farm's breeding strategy."

Robertson believes the accuracy of genomics is vital for sire analysts looking to breed sires for various systems around the world. For example, he says a US genomic sample on a young calf is currently a more accurate predictor of genetic ability than a New Zealand sire's first daughter proof.

He says this allows US farmers and breeding companies to make culling and breeding decisions sooner and more accurately.

"The ability for farmers to remove animals which are genetically inferior from the system not only offers significant savings in rearing cdosts but also increases the production level of the remaining age group.

"The ability to identify genetic outliers to father the next generation dramatically advances genetic gain and reduces the genetic interval."

The genetic interval is effectively the period of time between generations. The shorter the interval the more rapidly genetic improvement takes place. Reducing the genetic interval shouldn't come with a reduction in prediction accuracy, which is where high genomic accuracy is so important, says Robertson.

"In a population like NZ where genomic platforms are, by comparison, much smaller and combined with the crossbred nature of the population, the disparity from using unproven sires to father the next generation of sires becomes greater and accuracy is quickly lost."

He says the size of the US genomic database not only improves accuracy in predictions but, also the ability to develop and identify genes, or a combination of genes, which result in phenotypic expression - for example susceptibility or resistance to disease or illness.

"In recent times, for example, evaluations fro mastitis, lameness, metritis, milk fever, calf scours and many more have been developed. The ability for producers to select sires whose daughters are genetically less susceptible to mastitis is possible and raises the potential for future evaluations which will enable resistance to diseases like Johne's, BVD and facial eczema."

Robertson says that the CDCB database is enabling companies like WWS "to breed cows specifically for the needs of global markets".

"In New Zealand that translates to sires uniquely suited to our pastoral dairying - with huge components, fertility and longevity.

"Farmers all over the world face the pressure of improving the health and productive capacity of their herds as quickly as possible to offset the increasing cost of production. The prospect of reducing cow numbers globally will need to be offset by more productive and efficient cows to produce the same, if not more milk."