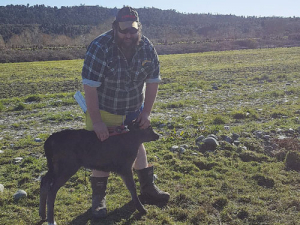 “This might seem another bloody thing to do at the end of a busy day onfarm, but not doing so compromises the integrity of the NAIT online system,” he says.

“You can’t have effective traceability without reliable information, and this includes recording any livestock death or loss.”

Stewart is a sharemilker on a 300-cow farm; he’s also involved with a family owned business of two dairy and one beef finishing unit.

He says he runs a tight ship, being a family business; all trade is done only between the three family farms.

NAIT has been an integral part of the business.

“I’ve been in NAIT from the start and got my younger brother who runs the drystock set-up on NAIT and my parents who run the home farm.

“All animals or calves we rear are tagged with a NAIT RFID tag within six months of birth or before they move off-farm. We register them in NAIT as soon as possible, ideally within seven days of being tagged. If someone has forgotten to do anything I will chase them up.”

Stewart says putting emphasis on NAIT is to safeguard the business against a biosecurity incursion or livestock disease response.

He says farmers have an obligation to declare all animals onfarm; it does not happen automatically.

“Not declaring your animals’ movement on and off farm is bloody irresponsible.”

He advises farmers to create and record all livestock movements in the NAIT online system within 48 hours of the movement happening.

“If the other party does not confirm the movement, let them know about it or you can actually make a request online for them to do so; this will be picked up by the NAIT organisation and they can act on that information you have entered in the online system.”

With Mycoplasma bovis lurking on some farms, raising calves is a challenge.

Stewart says their business is lucky because unlike other sharemilkers their calves or livestock only move between the family owned farms.

“So we know all animals are going to be tagged and registered. It’s important to complete your ASD (animal status declaration) with any movement; this way you can share the animal’s health and history with the next buyer or seller.”

Despite all the family farms being within 10km of each other, Stewart says they are registered separately under NAIT.

“This is probably a legacy of managing TB and movement controls on the Coast, back before NAIT even existed. It is actually good practice, because if you have an issue with livestock disease it might only be affecting one farm, meaning the rest of the business does not have to be locked down.”

Andrew Stewart says the value proposition of NAIT was not properly sold to farmers.

“Before the M. bovis outbreak, I think it was looked upon as another compliance thing to do, and farmers were already under the hammer with other issues like RMA and more recently health and safety.

“The cold, hard reality of dealing with a disease response and having systems like animal traceability suddenly resonated because of M. bovis and now it’s a no-brainer.

“If we don’t have NAIT and lifetime traceability of animals, we simply can’t guarantee our food quality or safety and that has implications for our reputation overseas as a food exporter.”