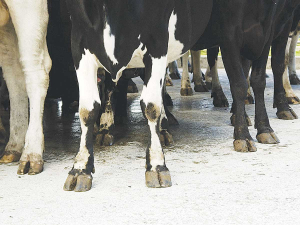 Laminitis is caused by a swelling of the laminar tissue which also cushions the pedal bone of the hoof.

Cattle are among a group we refer to as cloven hoof animals.  A cloven hoof consists of two claw sections, one slightly larger than the other.

The outer layer (horn of the hoof) is the hard surface that contacts the ground and is made from a hard keratin substance that is formed from the tissue directly beneath called the corium.  The corium produces new cells that get pushed to the surface where they die and produce the hard layer that forms the hoof horn.

The new hoof material grows out of the coronary band where the hoof meets the skin, is soft and holds a higher level of moisture. Under the horn of the hoof and between the horn and the corium sits a softer keratin layer called the sole, which is more supple and acts as a cushioning material in the hoof.

The white line so often referred to in relation to hoof issues is the line where the hoof wall is attached to the sole. A healthy white line should be flexible and should allow layers of the hoof to move as the animal moves around.

Lastly, the bones control the hoof; these bones are protected within the hoof through the various layers that make up the cushioning of the hoof, including the digital cushion – a thick layer of fatty tissue that sits above the corium and the sole of the hoof.

This whole area is richly supplied by blood vessels, which constantly form proteins that are key to forming the different layers of the hoof.

The various hoof diseases that afflict cattle and ultimately progress to lameness can be the most serious single issue experienced on many farms.  They can take many forms and to successfully treat the problem it is important to correctly identify the type of hoof disease and treat it quickly before it progresses too far.  I will briefly cover below, the different forms of hoof disease and the symptoms they present.

This disease is caused by a swelling of the laminar tissue which also cushions the pedal bone of the hoof. As the tissue swells this interferes with the blood circulation that supplies the corium layer of the hoof, this in turn can cause tissue death, the hoof can also grow in abnormal ways. Laminitis can cause a number of other complications, such as softening of the ligaments, compression of the digital cushion, hemorrhages in the sole as well as formation of low-quality hoof horn.

It is accepted that the primary cause of laminitis is ruminal acidosis.

Bovine Digital Dermatitis (BDD) is a recent disease, first seen in Italy in 2013 it is now prevalent in most countries and is thought to be now widespread in New Zealand.  Research in 2016 found it was prevalent on up to 80% of farms in the Taranaki region, and it is thought that it may be at similar levels in other regions. They are caused by a class of bacteria called Treponema, this bacteria thrives in wet muddy conditions, and thrives in animal manure. From there it quickly infects from hoof to hoof.

If identified and treated early it can be well controlled with antibiotics, foot baths, or topical sprays.

Research has shown that this disease can take hold in herds where immunity is low. The bacterial species involved usually start to take hold in the gut, and the endotoxins produced. Balanced mineral supplementation, particularly chelated forms of zinc when dosed in combination with sulphate forms have been shown to reduce the disease incidence and the fecal bacteria shedding that produces it.

This disease is caused by a bacterium that gets into the hoof. This anaerobic bacterium thrives in muddy wet conditions. The rot if left untreated can lead to foul smelling pussy discharge. Normally a course of antibiotics is given. Prevention consists of preventing hoof damage that allows the disease to enter the hoof, e.g. hard material on races and exit lanes. Also supplements such as chelated zinc and biotin supplemented into the diet that have been proven to harden the hoof. Other mineral such as copper and selenium are also important in respect of raising immunity to the disease taking hold in the first place.

When people think of liver function, they usually have a very vague concept around the filtering and cleansing of blood.