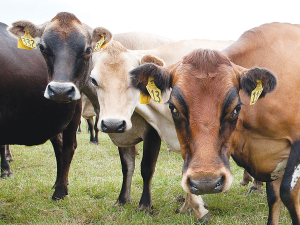 After calving, cows will be in the ‘colostrum mob’ for the first eight milkings before entering the milking herd.

Mastitis is inflammation of the udder tissue and is most commonly caused by bacteria entering the udder through open teat ends. Calving is a critical time when cows are more prone to developing mastitis. It is important to have good management for prevention, rapid diagnosis and effective treatment of mastitis around calving.

Keeping the udder and teat ends clean is important in the lead up to calving as cows “spring up”. Cows close to calving are naturally immunosuppressed, and if they are lying in dirt and muck, their full udders are exposed to mastitis-causing bacteria in the environment. Clean and relatively dry springer breaks will help prevent mastitis, as will keeping springers off paddocks where effluent has been spread, even in the previous season. If required, shift springer breaks more regularly. Any springers that are leaking milk should be milked, as this means that their teat ends are open and they are prone to infection4.

Whether it’s springers, colostrums, or milkers that you’re milking, it’s important to only put cups on clean, dry teats.

When droplets of dirty water or muck hit open teat ends, the risk of mastitis goes up. So, if cows come in for milking with dirty teats, give them a quick clean with a dry paper towel. Don’t hose udders. If teats are wet, it’s best to dry them before cupping them up.

After calving, cows will be in the “colostrum mob” for their first eight milkings before entering the milking herd.

A helpful tool to identify cows with elevated somatic cell counts with no clinical signs of mastitis, otherwise known as sub clinical mastitis, is the Rapid Mastitis Test or RMT.

RMT all colostrum cows at their eighth milking, before drafting them into the milking herd. It’s normal for some cows to be RMT positive around calving time, so keep these cows in the mastitis mob until they are RMT negative. If you have a cow test RMT-positive for several milkings beyond eight, you should discuss further diagnostics and treatment with your veterinarian.

A final important check before drafting colostrum cows into the milkers is to make sure that you have followed all withholding periods for dry cow therapy, to ensure that milk entering the vat is fit for sale.

For all cows, effective teat spraying is the single biggest step you can take to prevent mastitis7. Cows should be teat sprayed with a commercial product, mixed and applied following the manufacturer’s recommendations, every time that they go through the shed. Also, after milking, give all cows immediate access to feed to encourage them to stay standing while their teat ends close.

• For more information about mastitis, speak with your vet, consult DairyNZ SmartSAMM resources, or visit www.TopFarmers.co.nz

• Dr Sean Daly is a vet and technical adviser at MSD Animal Health.

Providing a newbown calf with colostrum within 12 hours of birth is vital, we know that. And if maternal colostrum is unavailable or poor quality, a colostrum replacer can provide an essential alternative.