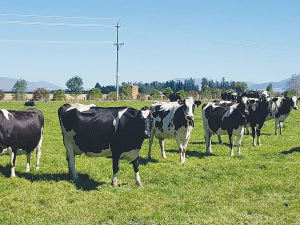 The Belgian Blue mated cows had proven to be easy calving and the calf rearers loved them.

CRV says it has sourced additional frozen sexed semen straws to cater for demand, as orders from farmers triple those from last season.

The company believes the rise in demand is a result of dairy farmers looking to accelerate their herd's genetic gain and reduce bobby calf numbers.

"We've seen demand for sexed straws continue to grow year-on-year. For herds with good fertility management, using sexed semen from the very best proven bulls is the most effective way to get ahead."

Many farmers are also using sexed semen to strategically improved herd replacements, and then mate the remainder of their herd with dairy-beef genetics.

Mount Maunganui-based farm owner Ian Hopping invested in sexed semen for the first time last season. He chose it as an easy calving option for his heifers that would help ensure replacements from his genetically best animals. After a high conception rate, he is thrilled with his return on investment.

"We wanted high quality Friesian calves from our Friesian yearling heifers which have some of our best genetics," says Ian.

"In the past, if we had calving difficulty with a heifer, 90% of the time she would have a bull calf. So, we took bull calves out of the equation by going to sexed semen.

"Calving of our heifers this spring has gone really well, with approximately 400 heifer calves born in July and 10% bulls, which we expected. Until we get DNA results back, I can't confirm how many heifer calves resulted from the sexed semen, but looking in the calf sheds, we are more than happy with the result."

Ian says using sexed semen also allowed him to get enough replacements early and mate a larger percentage of his milking herd with short gestation Belgian Blue, to help condense his calving.

The milking herds are mated to CRV conventional Friesian straws for four weeks and the Belgian Blue for five weeks. Ian says the Belgian Blue had proven to be easy calving and the calf rearers loved them.

While there is a slight reduction in cow conception rates when compared to conventional semen products, Peter van Elzakker says sexed semen is a great option for heifer mating.

"Each pregnancy from sexed semen gives farmers a 90% chance of a heifer calf. This means getting replacements from elite cows, building herd numbers, or creating value through excess heifer sales is a real option to drive herd improvement progress and profitability.

"Conception rates with sexed semen can be around 10% lower than non-sexed semen, but the genetic gains you get when you're mating them with your top heifers make it a worthwhile investment."

Using sexed semen in combination with dairy beef can also reduce the number of bobby calves, an increasingly important factor for farmers as they consider animal welfare.

Sexed semen is available from a selection of CRV's best New Zealand and imported bulls, including the company's stars, such as Carrick, Cagney and Splash.

The bulls available are the company's highest indexing bulls, recognising that farmers want quality replacements from their best cows. One of the benefits of frozen sexed semen is that farmers get exactly the sire they order and can manage their mating allocation on the days, says van Elzakker.

The number of New Zealand dairy cows mated to sexed semen is set to double this year as farmers look to capitalise on the technology which delivers a 90% chance of producing a female calf.

Herd improvement company, CRV Ambreed becomes CRV as the Dutch company brings together all its global business units under one brand name.