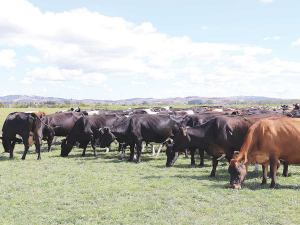 Many farmers will be looking to reduce empty rates that are dragging down profitability.

Many will be looking to improve this year and reduce empty rates that are dragging down profitability. With the higher payout, farmers are keen to explore new approaches that can deliver stronger reproductive results while improving the quality of life for the team.

Assuming nutrition, health and animal management is under control, if your operation is inseminating cows for six weeks or more while suffering a stubbornly high empty rate, consideration might be given to the risk of re-inseminating pregnant cows because of poor heat detection calls.

It's well known that as herds have grown, so has the heat detection challenge. Thanks to M. bovis and other factors, farmers are breeding longer. Throw adverse conditions into the mix, or staff changes and there's little surprise that heat detection accuracy can become highly variable.

Sometimes answers to present challenges are in the past. It's accepted science that re-insemination of pregnant cows results in losses in the order of 50-80% of pregnancies. It's worth knowing that 30 years ago, Weaver and others showed that deliberately re-inseminating into the uterine body within 12-24 days of the initial insemination reduced pregnancy rate from 41% within the control group of cows to only 4% in the study group - a tenfold factor.

Progressive Dairy recently published an article titled 'A different look at pregnancy loss' noting that accurate heat detection is fundamental. In fact, research showed up to 20% of cows inseminated on study farms were not actually in heat.

Most heat detection methods suffer from high false positive rates, requiring highly-skilled people putting in the hours or are based on fundamentally less reliable secondary signs of heat. These false positives are reflected in the farm numbers. When coupled with fatigue, stress, staff changes, adverse weather and trees, the situation can quickly become challenging with tailpaint or patches.

Hard on the heels of calving, heat detection fatigue leads to poor decision making. Many farmers suggest it's the constant 'line-call' decisions that particularly wears them down. It's difficult to step away for a break, because everyone is painfully aware that profitability is riding on the mating result.

Here in New Zealand with the advent of M. bovis, many farms have lengthened artificial breeding in an effort to reduce the need for bull cover coming to farm. Some farms are clocking up as many as 13 weeks of artificial breeding, increasing the risk of embryonic loss through re-insemination over the second and subsequent cycles of breeding.

For all of that well-intentioned effort and investment, mistakes are costly and can be difficult to pinpoint in farm metricts. It's frustrating to achieve a solid three-week submission rate, an agreeable six-week in-calf rate, go on to invest in extended artificial breeding to chase the gains, yet still suffer a high empty rate. It can seem like "the harder we try, the worse it gets" as one farmer recently put it. As humans, we can suffer a bias toward action when doing nothing would have delivered better results.

Most will realise that on top of blown pregnancies, inaccurate heat detection lowers production, increases breeding costs, decreases conception rate, increases calving spread and can lead to the early loss of perfectly good cows from the herd.

If this all seems sadly familiar, heat detection accuracy may bear greater scrutiny. Before calving rolls around, refresh your heat detection knowledge. Look hard at the tools you use and consider lifting the accuracy of your heat detection approaches to help create and safeguard those early pregnancies that puts milk in your vat one or more cycles earlier.

In addition to tail paint and stick on aides, there are now research-validated accurate tools available at similar outlay to patches, which don't require software training, installation or skill to interpret. Some methods are now accurate enough to excel at detecting silent or quiet cows in heat, meaning they pay for the investment on that basis alone almost straight away. Investing in better tools can further allow heat detection to be shared around the team avoiding burn out. Nobody likes getting up early every day, week after week.

As most balanced articles about technology adoption test, do your homework and talk with other farmers to ensure you achieve a solid and early return on your heat detection dollar.

Consider if there is an obvious next step to lift your results that does not require capex or multi-year lock in. Don't be afraid to ask for hard evidence, such as real farm results or copies of any science articles behind any claims made. Some accuracy claims rely on studies involving as few as 18 cows and even then, the object of the research might actually relate to a different factor that doesn't really interest you.

Make sure you talk to as many other farmers as possible about their experiences before committing to anything new, discuss actual numbers if they're willing. In the end, you need to be certain you really will see valuable benefits that genuinely make life better.

Definitely look hard at false positive rates, in light of the research on embryonic loss from re-inseminations and investigate accuracy; not just around success in identifying heats, but also the timing of when the heats are called. This matters, because accurately timed alerts and inseminations increase conception rate, which means more cows pregnant to the first cycle and more milk in the vat, sooner. Accuracy in heat detection shows up in key farm records over subsequent seasons.

Mating comprises many moving parts and there are no silver bullets. There are many potential reasons for high empty rates, but it is worth contemplating if your heat detection practices and other pressures are resulting in the re-insemination of pregnant cows.

This may be a significant factor in the reproductive results for your farm.

One size does not fit all

It all comes down to good bulls

Good bull management means running adequte numbers of bulls with the herd, reducing their stress, and handling bulls to minimise the risk of injury to people and animals.