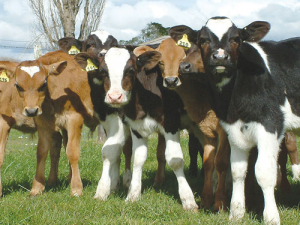 Copper deficiency could be linked to lameness.

Every mating season, veterinarians are called to fresh calved heifers presenting with unexplained severe forelimb lameness. This could be down to copper deficiency.

Often there is no history of sustaining an injury or signs of obvious trauma with the fractures occurring in heifers spontaneously around the time of bulling. The bone most commonly involved in these situations is the humerus (bone running between the shoulder and elbow joint) and on postmortem these bones can be extensively damaged with severe trauma to the surrounding soft tissues. These animals inevitably end up being euthanased on humane grounds and therefore represent a significant financial loss to the business in addition to the pain and suffering endured by the animal suffering such a fate.

Research conducted approximately 10 years ago at Massey University failed to pinpoint an exact cause and disease process, however this work did uncover some closely associated risk factors.

Copper is an important component of an enzyme responsible for strengthening connective tissue (such as bone). This enzyme, called Lysyl oxidase is responsible for forming cross-linking (similar to bracing timber) between structural proteins in bone. If this cross-linking is compromised so too is the normal laying down of bone mineral, meaning the strength of the bone is compromised.

Unfortunately for the farmer (and more so for the animals themselves) by the time there is a noticeable increase in fractures there is not much that can be done to immediately rectify the issue.

Copper deficiency in cattle occurs due to the fact predominately ryegrass based diets are relatively low in copper. Often copper supplementation is overlooked in young stock because they are out of sight – out of mind. Further because the greater amounts of supplementary feeding in the milking herd, very seldom do we diagnose copper deficiency (PKE has relatively high levels of Copper).

The extent of this problem in young stock was investigated several seasons back when our practice conducted some basic surveillance work on rising two-year-olds returning from grazing looking at Cu levels. What we found was over 80% of R2’s mobs sampled had individual animals deficient in copper (Serum copper levels below 4.5 umol/L) requiring supplementation.

So while it is too late to reduce the risk of copper-deficient related fractures in heifers this season, you should review your copper supplementation program in R1’s & R2’s immediately.

This article is brought to you by J. Swap Stockfoods.