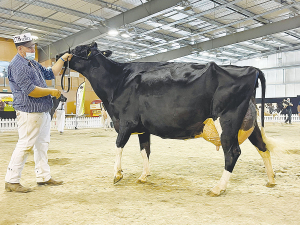 Isaac Kelson leads the Supreme Champion Joyclas Sammy Moo to the top of the Holstein show before she would go all the way against the other breeds. Photo: Mud Media.

The overwhelming response coming out the New Zealand Dairy Event (NZDE) was exhibitor relief that the show went ahead.

The timing of the Government moving New Zealand to a red traffic light Covid protection framework couldn't have been worse, with exhibitors either already at the show at Manfield Park, Feilding, or on the way.

Exhibitor numbers were immediately limited on-ground to 100 (plus event staff), and any hope spectators being allowed onto the showgrounds were dashed.

Part of the solution came in the form of 'bidr', a New Zealand's online selling platform, which stepped up to livestream the event. It is the first time that's happened in New Zealand.

Owner of the Ayrshire Champion and NZDE committee member Selwyn Donald said the organisers were put in a tough situation, but the positive exhibitor response has been deafening.

"So many people have come to me and thanked us for pushing on with the event under trying circumstances," Selwyn said.

"We could have pulled the pin and sent everyone home, but if we did, everyone would have spent a lot of money getting cows ready and not known where they fitted amongst their breeds.

"It was a huge call. But we also must congratulate and thank the exhibitors for also doing their part to make it possible, and the livestream was brilliant. I had messages from South Africa, the UK, the USA and Canda congratulating us on our win [Ayrshire Grand Champion with Aaron Rondo Lohnrom whose lead-up was hampered by Theileria and mastitis]. That probably wouldn't have happened if it had been open to the public. The livestream was a definite positive to come out of the week.

"Across all the breeds the championship lineups were pretty outstanding. That was the best Holstein show I'd seen for a while."

It was the Holsteins that won the Junior, Intermediate and Senior Supreme awards of their ages after the scores were collated from the five interbreed judges which included Kylee Perrett (South Taranaki, Youth Show), Ryan Lett (Waikato, Combined Breeds), Bernie Cox (Mid-Canterbury, Holstein), Craig Robertson (Canterbury, Jersey) and Roger Hutchings (Northland, Ayrshire). Together they awarded a Black Holstein, Joyclas Sammy Moo, the Supreme individual title of the show.

For Lawrence (co-chair of the NZDE) and Judi Satherley (event hospitality co-ordinator) they got the chance to watch their daughter and son-in-law Robbie and Anna James win with Sammy Moo in a triumph they could never have imagined.

The last time Joyclas Holsteins won Champion Holsteins was at the Hastings Royal Show in 1993. Since then, the herd has passed through some family members' hands, and while some cows have had to be re-traced the herd today is run by Robbie and Anna (their daughter) James.

They milk 300 cows on 150ha (including young stock) at Linton in the Manawatu. Joyclas Holsteins now includes 60 registered Holsteins. They showed three in-milk cows and one entry in partnership with Semex's southern North Island manager and part-time fitter, Isaac Kelsen.

The two-year-old Holstein that rose to the top of the intermediate show was last year's Holstein and All Breeds Junior Champion.

Charbelle Tatoo Pix, owned by Charbelle Farms, in Hamilton was also Best Supreme Udder of the Intermediate Show. Annabelle Scherer, who was on the halter said it was a wonderful moment for their family who were showing at their third NZDE. She said they had briefly considered not coming because of Covid restrictions, but they are now so relieved they loaded up that truck.

"We did consider it because where we are in the country is tough and it's drying out pretty quickly," she said. "It's not an easy prep, but we're glad we made the effort because the result was outstanding. As I've reflected on it driving home it does make all the work worthwhile for that one moment in time.

"When I came out of the ring, Stephen (Annabelle's husband) got emotional. He does all the work, he looks after these girls, he knows them, he milks them every day - twice-a-day. He was super proud. Mum and Dad were also quite emotional because these families come from their breeding. Our crew and family have also been amazing."

Larkspur Lauthority Whip, a Comestar Lauthority daughter, was the Junior Supreme of the show. She was exhibited by Lara Honeyfield, at Kairanga, on behalf of Whip's owners, Ron and Amy Baker, of Fusion Genetics.

Ron Baker candidly admitted that there had been some robust discussions about whether Whip deserved her place in the team before the show.

Regardless, Whip already had runs on the board. Last year, she was second in the Junior Calf class in the Holstein show and the L'Authority x Diamondback x Windbrook daughter has some other telling credentials. Her granddam is the top-producing Holstein in the couple's 160-cow (year-round) herd, with a completed 305-day lactation of 1,114kg MS [14,761 litres].

The pair say they enjoy the rivalry of choosing the show team and every year one of them has the final say. Up for grabs is a year's bragging rights when they get it right. It might be a long year for Amy this time.

It completed a strong show for Whip's handler, Lara, who also won the Intermediate Handler's award in the youth show, in addition to being a member of the winning Open Country Youth Team Challenge team, Ollie's Angels.